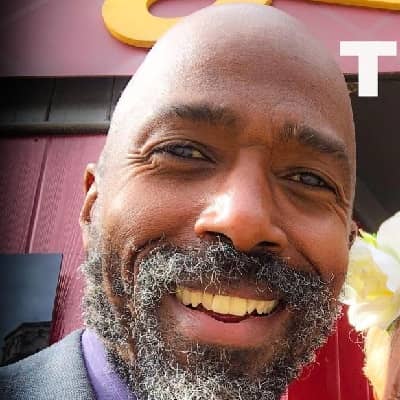 Previously, he was married the Ena Frias. The couple tied the knot in 2001. After six years later the pair got divorced in 2007.

The pair has a baby together, a daughter. However, her name is unknown. She has also appeared in the television drama, The Chi season 3.

Who is Ntare Guma Mbaho Mwine?

Ntare Guma Mbaho Mwine is an American actor, playwright, photographer, and activist. He is best known for starring as Tonnie on showtime’s The Chi (2018-2020).

The exact birth date is not available regarding Ntare however, he was born in Hanover, New Hampshire in May 1967. He holds a dual citizenship i.e., of Uganda+America and is of Ugandan descent.

His father was an attorney who earned his law degree at Harvard and his mother taught psychology at the University of Nairobi.

In addition, his father was the first Ugandan man to obtain a law degree from Harvard University. Nonetheless, he hasn’t still disclosed his parent’s name.

His parents were separated when he was 7 years old. He spends most of the time with his father at an early age.

Ntare graduate from the New York University’s Graduate Acting Program at the Tisch School of the Arts with a master’s degree in Fine Arts in 1992.

Also, he studied at the University of Virginia, the Moscow Arts Theatre, and the Royal National Theatre in London.

Ntare began his career as a stage actor in 1992, appearing in the role of Paul in the National Tour of Six Degrees of Separation. He appeared in many stage production such as The Riddles of Race, Circa ’98 (1994), and Scent of the Roses (1998).

He served as a playwright for a bare stage one-man show entitled Biro. Similarly, he made his first appearance on television was in New York Undercover in 1995. Also, he has appeared in the movie Blood Diamond which is his first film debut.

Apparently, he has appeared in the 2020 American drama film Farewell Amor where he portrayed the role of Walter.

He has made an appearance in various television drama and film which are listed below,

Besides, the actor has been displayed at the United Nations, The Latino Art Museum in California for his photographs work. Also, his photography has appeared in Vanity Fair.

To date, he maintains his profile as an actor and photographer so, he has not involved in any sorts of rumors and scandals that create headlines in the media.

The actor hasn’t revealed his actual salary. Nevertheless, he has an estimated net worth of $10 million throughout his multi-profession.

The actor is 5 feet 9 inches tall and unfortunately, his weight is unknown.