Posted by MarriedBiography Last Modified May 2, 2021 | In Married , Relationship , Wedding
Share this 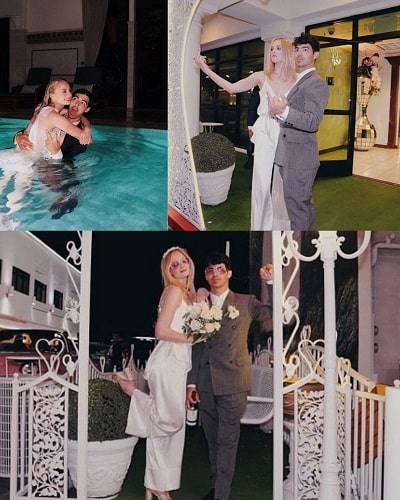 From streaming first wedding on Instagram to have a second wedding in France Joe Jonas and his wife Sophie Turner rocked them both!

The married couple of two years shared their unseen-wedding pictures on the occasion of their 2nd Las Vegas Wedding anniversary.

2. Pool romance is the best!

Hubby Joe posted the photos with the caption,

“Married as [email protected]$K for 2 years! Love you bub @sophiet”

Many people including their celebrity friends have congratulated them. Also his wife Sophie commented,

The English actress and her husband welcomed a beautiful baby girl on Wednesday, July 22, 2020. As per the reports, the couple is very happy to announce the news of the new member of their family. Meanwhile, the couple has not made an official announcement through their social media accounts. Though they have not announced any details of their newborn, as per TMZ, they named their baby girl, Willa. They have not yet revealed the first glimpse of their newborn on the Internet.

The couple never made the official announcement of their pregnancy and kept everything very private. Turner and Jonas tried experiencing their first pregnancy on their own without any media attention. They also avoided any questions related to their pregnancy and baby arrival. Turner also avoided posting her pregnancy journey on the internet, however, paparazzi clicked her with her baby bump while she was out. Continue reading…

Joe Jonas is an American singer who exhibits a perfect sample of a beautiful voice and earned enough name and fame as a member of the boy band Jonas Brothers in which his own siblings Nick Jonas and Kevin Jonas were the other two members.

Getting involved in Disney Channel and releasing his debut film Original Movie Camp Rock (2008) made them more highlighted in the frame of the film industry as well. Read more bio…