Talking about his love life, Okieriete Onaodowan had been in a longtime relationship with his girlfriend, Alyssa Kempinski. Alyssa is a Deuce actress. The couple was spotted many times publicly. However, their relationship made headlines after they were spotted together on a romantic vacation in San Diego.

Okieriete also posted a photo of them together taking a walk on the beach on 11 October 2014. They also walked the Red Carpet at the Tony Awards. Presently, the actor seems to be single as he has deleted all of his social media posts and is not seen together.

Also, Alyssa seems to have a new boyfriend. 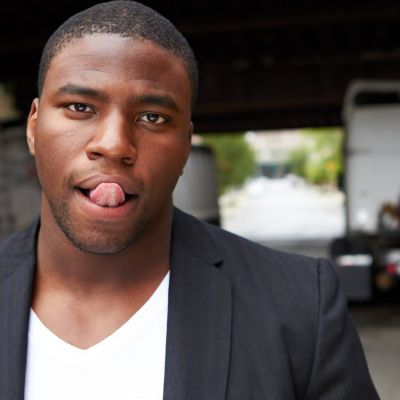 My mother says "Many drops make an ocean..."

Who is Okieriete Onaodowan?

Okieriete Onaodowan is a well-recognized American actor, rapper, and singer. Onaodowan is widely famed for originating the dual roles of Hercules Mulligan and James Madison in the 2015 musical Hamilton and the role of Dean Miller in the ABC drama and Grey’s Anatomy spin-off series Station 19.

Moreover, he has also performed on stage in Rocky the Musical and in the first national tour of American Idiot.

Okieriete Onaodowan was born on 16 August 1987. At present, his age is 33 years old. Likewise, his birthplace is Newark, New Jersey, the USA.

Not known much about his father and mother’s details, Okieriete has been secretive towards his family details. Moreover, he has five sisters and was raised in West Orange, New Jersey.

Talking about his nationality, Onaodowan holds an American identity whereas his ethnicity is Nigerian.

Regarding education, the actor studied at Gregory Elementary School, Roosevelt Middle School, and West Orange High School. Later, he auditioned for and was accepted to the Mason Gross School of Arts at Rutgers University.

Initially, Onaodowan started to explore acting as an alternative extracurricular activity during his high school days. While attending high school, Okieriete started performing with the New Jersey Youth Theatre. The actor had roles in Rocky the Musical and Cyrano de Bergerac on Broadway and was in the ensemble of the first national tour of American Idiot.

Onaodowan then featured in the leading role in Young Jean Lee’s 2009 play, The Shipment, and portrayed the title role in J.C. Lee’s Luce. He has also featured on many screens such as Lou in the feature film, Thanks for Sharing, and roles in the TV series Gravity and Blue Bloods.

the star performed the roles of James Madison and Hercules Mulligan in the musical Hamilton on Broadway. For that role, Okieriete earned a Grammy Award as part of the cast album of Hamilton.

Likewise, he played the role of Pierre in the musical Natasha, Pierre, and the Great Comet of 1812 substituting the outgoing Josh Groban. Later, the star featured in the role of a firefighter, Dean Miller in the Grey’s Anatomy spin-off, Station 19.

Additionally, Onadowan has also featured in the television series, Robot Chicken and Social Distance in 2020. He was also nominated for Broadway Audience Choice Awards in Hamilton.

Nigerian-originated actor, Okieriete has earned a handsome amount of money from his multiple profession. He has been active in his profession from the year 2010 till the present.

It is reported that Okieriete Onaodowan has an estimated net worth of $3 million as of 2022.

Okieriete has never been part of any controversial matter or rumors till now. The rapper has been preoccupied with his professional and private life.

It seems that Onaodowan prefers enjoying his personal life and does not want to merge it with his professional life.

33 years old star, Okieriete has dashing looks, a muscular and athletic body, and an admirable personality. He stands at a height of 6 feet. Also, he has a balanced bodyweight of 88 kg.

Furthermore, Onaodowan has black eyes whereas his hair is black. His body measurement is 44-34-16 inches(chest-waist-biceps) respectively.

Nevertheless, the celebrated singer has never mentioned other physical details in the public yet.

Regarding his social media presence, Okieriete Onaodowan is an active personality on social media. Okieriete has more than 349k followers on his official Instagram account @oaksmash.

He is also active on Twitter with around 193.6k followers.

Moreover, Onaodowan is also available on Facebook with nearly 17k fans and supporters.