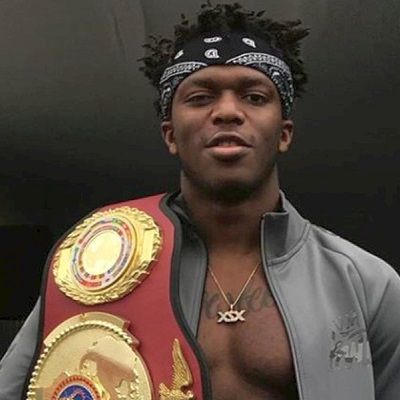 I am trying to make sure that I don't spend on ridiculous things, so that after all this YouTube thing goes, I'm not left there, like, 'Uh oh, I have nothing

Essentially, I'm a 21-year-old who's a millionaire through gaming, vlogging, and my online experience. Yo, I'll take it

A lot of people think being at the top means you have to be the best at a certain game. You don't. It's more about personality.

Previously, he was dating Seana Cuthbert who is also a YouTuber. But their affair ended in the year 2014. For this breakup, Seana said that it was a long-distance relationship and Olajide was also busy with his YouTube videos.

Who is Olajide Olayinka Williams?

Olajide Olayinka Williams is a British social media personality. He is a popular YouTuber and rapper.

He is also one of the founders of a YouTube collective named Sidemen.

He was born as Olajide Olayinka Williams Olatunji on 19 June 1993 in London, England.

His ethnicity is Nigerian.

Regarding education, Olajide went to Berkhamsted School, London. He left his secondary-level study to continue his YouTube career.

Olajide Olayinka Williams is very popular on social media. He is a YouTube star and has his own channel, which is subscribed by more than 20.9m subscribers. It was created on July 25, 2009.

As a rapper, KSI has written and produced his comedy rap songs. His EP Keep Up was released in 2016. Then in 2019, he dropped his first single Down Like That and album New Age. In his single Down Like, other artists S-X, Rick Ross, and Lil Baby have appeared.

KSI along with other four British YouTubers formed a group known as Sidemen on 19 October 2013. The names of other members are Vikram Barn, Josh Bradley, Tobi Brown, Harry Lewis, Simon Minter, and Ethan Payne.

This group produces online videos about challenges, sketches, and video-game commentary. They also sell Sidemen merchandise. But on 4 Aug 2017, KSI tweeted that he might leave the Sidemen. The reason for leaving was a conflict with fellow member, Ethan Payne.

Olajide has won Vlogger of the year in 2016 by NME Awards. He was also nominated for Best YouTube Ensemble and Best YouTuber of 2019 in the year 2019.

KSI’s brother Jedi had twice uploaded the bank records to the public in 2015 and 2019. This act made KSI upset with his brother as well as his family.

Jedi apologized for the first time but he again did the same thing. As per now, KSI stated that all things are settled with him and his brother.

In 2012 and 2013, Olajide faced criticism for his rape-face joke. Similarly, in the Eurogamer event of 2012, he was accused of sexually harassing staff and attendees.

Because of this behavior, he got banned from all the Eurogamer events. Later he apologized for his actions.

Besides earning, Olajida is also active in donating to the needy. He donated $10k to an online charity stream in 2015. In 2016, he collected over £110,000 by playing in the Sidemen Charity Football match and handed it to the Saints Foundation.

He also gave his Ending it all video’s revenue to suicide-prevention charities in 2019.

Talking about Olajide Olayinka Williams’s body features, he has black eyes and black hair. His height is 6 ft and body weight is 85 kg.

Similarly, he joined Twitter in March 2011 and has around 5.4m followers. Moreover, his Facebook page has over 2m followers.