Olena Zelenska is in a happily married relationship with her husband Volodymyr Zelenskyy, who is the 6th president of Ukraine.

After dating for 8 years, the couple officially got married on 6 September 2003.  They are blessed with two children. Their first child, daughter Oleksandra was born in July 2004 while their second child, son Kyrylo was born in January 2013.

They knew each other during Zelenska’s University time though both of them were classmates before. 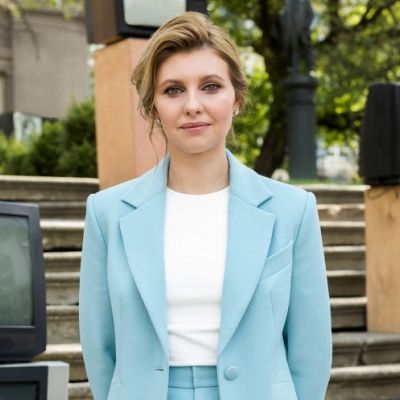 Who is Olena Zelenska?

Olena Zelenska is a Ukraine-based screenwriter and media personality. She is also known to be the wife of 2022, President Volodymyr Zelenskyy. She ranked 30th position in the list of the 100 most Ukrainians by Focus Magazine.

The attack was started to take effect first in 2021 when the Russian military gathered at the border of Ukraine. After a year, on 24 Feb 2022, Vladimir Putin, President of Russia announced the military operation in Ukraine. Then Volodymyr declared martial law when missiles were launched by Russians at Ukrainian military bases.

The war was later targeted to the public and Ukraine started to receive global recognition for its leaders of other countries. They helped Ukraine by supplying arms and other materials.

Olena Zelenska was born in the Kryvyi Rih, Ukrainian SSR, the Soviet Union on 6 February 1978. Zelenska is 44 years old as of 2022. She follows Christianity as the main religion while her ethnicity is European. Her nationality is Ukrainian.

Olha Kyiashko is her mother’s name while the name of her father is still unknown to the media. She attended Kryvyi Rih National University where she studied architecture at the Faculty of Civil Engineering. Though, he began to write for Kvartal 95, and eventually, became a writer.

Olena Zelenska became the first lady of Ukraine on 20th May 2019. She got featured on the cover of the December issue of the Ukrainian edition of Vogue on 18 November. She talked about her foremost campaigns of nutrition changes in the schools of Ukraine during the interview.

During the start of the Campaign, the updated and latest school nutrition menu with around 160 varieties was changed and designed by chef Ievgen Klopotenko of CultFood.

The menu consists of both classic Ukrainian dishes and famous dishes from various cuisines of the world. After the approval of the improved food menu by The Cabinet of Ministers of Ukraine, the reform came into action on 1 September 2021.

Similarly, In September 2020 her initiative on Ukraine’s acquisition regarding the G7 international steps on the Biarritz partnership, gender equality got finalized. Zelenska talked about the Fourth and Fifth Ukrainian Women’s Congresses in November 2020 and September 2021.

It become an outlet that brought Ukrainian and other international public personalities, politicians, experts, government officials, and opinions leaders for equal rights for women and men.

Olena got comprised on the board of the Art Arsenal by her husband, Volodymyr Zelenskyon January 13, 2020, which is led by Minister of Culture Volodymyr Borodiansky.

Likewise, she took initiation for the worldwide publicization of the Ukrainian language including enormous museums of the world in June 2020.

11 audio guides in Ukrainian were distributed in 2020 in museums in Azerbaijan, Italy, Turkey, Montenegro, Austria, and Latvia as well as in two ways of Lithuania.

Similarly, the Ukrainian-language audio guides were launched at the Mount Vernon, museum, the Fine Arts Museums of San Francisco in California, Versailles, the Sagrada Familia, Frederiksborg Castel, the Museum of Anatolian Civilizations, and the Hundertwasserhaus, Galata tower.

In May 2020, she launched a questionnaire for the building of barrier-free society, in association with the Ministry of Digital Transformation and United Nations Development Program in Ukraine said that they would develop a suitable catalog of services for helpless peoples.

With the motive of “Soft power in new reality”, she began the Kyiv Summit of First Ladies and Gentlemen in August 2021.

The net worth of Olena Zelenska is calculated to be between 5 to 6 Million USD. Though, there is information about her salary and income.

Olena Zelenska has not been part of any serious rumors and controversies up to date.

Regarding her facial appearance, she has fair skin with a couple of hazel eyes. She has got blonde colored hair.

Olena Zelenaska is also active on social media platforms. She has an Instagram account with more than 2 million followers. Talking about the present situation of Ukraine in 2022, Olena Zelenska is doing a social medial rally with her followers.

“Today I will not have panic and tears. I will be calm and confident. My children are looking at me. I will be next to them. And next to my husband. And with you.”