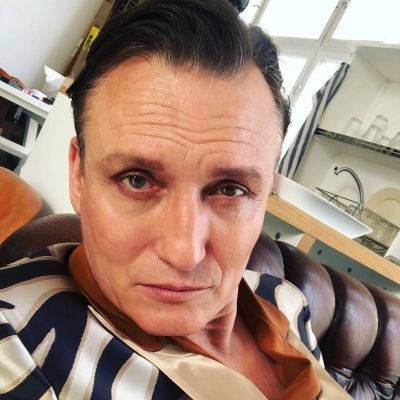 Oliver Masucci is a married man. He is living a blissful conjugal life with his long-time wife. However, he prefers to keep a low-key regarding his family member.

The couple is blessed with three daughters including Milla Masucci. Milla is often seen with her father in several events such as premiers, awards shows, and so on.

Who is Oliver Masucci?

Oliver Masucci is a German actor who is best known for his role as “Adol Hitler” in the 2015 film, Er Ist Wieder Da and ” Ulrich Nielsen” in the Netflix series, Dark.

His upcoming project is ‘Fantastic Beasts: The Secrets of Dumbledore’ and ‘Day Shift’, which are set to release in 2022.

Oliver was raised in Bonn as his family ran several restaurants. The actor hasn’t yet disclosed his parent’s identity in the media. Also, his academic background is under the curtains at the moment.

Further, Oliver holds German nationality whereas his father is Italian and his mother is German.

In 1992, Oliver made his debut in the movie through the film, Andy. He then appeared in the television series, Schwarz greift ein in 1999 where he portrayed the role of Ricky Ohlsen. The following year, he appeared in Heinrich Breloer’s film, Die Manns – Ein Jahrhundertroman as Lohengrin.

Furthermore, his recent project is the 2020 film, Enfnat Terrible where he portrayed the role of German film director “Rainer Werner Fassbinder” and “Moses” in the Netflix series, Tribes of Europa.

Oliver has never been part of any sorts of rumors and controversy to date. He has managed to maintain a clean profile.

Oliver is active in the acting industry since 1992. Since then, he has amassed a hefty income from his successful acting career but hasn’t disclosed it in the media.

His salary, real estate, and other earning are still under review.

Talking about Oliver’s physical appearance, he has a towering height. He stands at the height of 6 feet 1 inch tall and his weight is about 64 kg.

Further, he has light brown pair of eyes and has blonde hair color.

He is also active on Facebook with 3k friends.