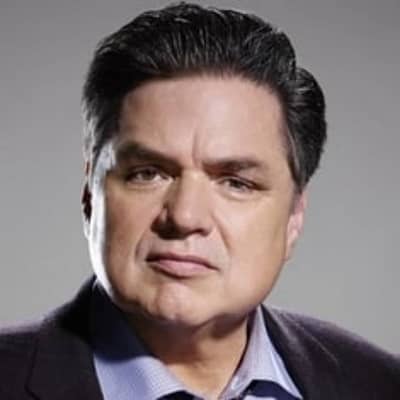 Oliver Platt is a married man and a father of three children. On September 12, 1992, Platt gets married to Mary Camilla Bonsal Campbell at the First Congregational Church.

In 1995, the couple is blessed with a daughter named Lily Platt. Similarly, they welcome their second child a son named George Plattin 1995, and a third child named Clare Platt in 1999.

Platt currently resides in North Haven, Maine with his husband and children.

Who is Oliver Platt?

Oliver Platt is an American-Canadian renowned film, stage, and television actor. He rose to fame after appearing on the showtime comedy-drama series, The Big C where he portrayed the role of Paul Jamison.

He is also best known for appearing in the films like Flatliners, The Three Musketeers, X-Men: First Class, Executive Decisions.

Oliver was born in Windsor, Ontario, Canada, on January 12, 1960. At present, he is 61 years old. His full name is Oliver James Platt. He holds dual nationality of American and Canadian. Likely, he belongs to mixed ethnicity of English, Irish, Dutch, and French.

The name of his parents is Nicholas Platt (father) and Sheila Maynard (mother). His father is a career diplomat who served as U.S. ambassador to Pakistan, Zambia, and the Philippines. Similarly, his mother is a clinical social worker by profession.

Platt comes from a very prestigious family, his paternal great-great-grandfather Joseph Hodes Choate was the most successful lawyer in New York City. Similarly, his great-grandfather Charles A. Platt was an artist and architect.

Moreover, his maternal great-great-grandfather Robert Shaw Oliver is a renowned soldier and businessman and his great-grandfather Cynthia Burke Roche was a socialite and art collector from Newport, Rhode Island.

Oliver spent his childhood in different countries like Asia, the Middle East, and Washington, D.C. because of his father’s profession as an ambassador. Platt enrolled in twelve different schools one of them is American School in Japan.

After graduation, he worked for three years as a stage actor in theatre in Boston, Massachusetts. Platt was fascinated with acting at the age of nine when he visited the Kennedy Center in Washington where he watched a performance that helped inspire his acting career.

Oliver made his television debut in the year 1987 through the movie, The Equalizer in an episode of  “In the Money” where he portrayed the role of Norm Jameson. In 1988, he made an appearance on the NBC series, Miami Vice in the role of Speed Stiles.

That year, he also made his big-screen debut and appeared in the movie like Married to the Mob (as FBI Agent Ed Benitez) and Working Girl (as Lutz). In 1999, he appeared in David E. Kelley’s Lake Placid alongside Bridget Fonda and Bill Pullman.

From 2000 to 2001, Platt was cast in the short-lived sitcom Deadline as Wallace Benton. Soon after this, he joined the cast of the courtroom drama Queens Supreme in 2003. In 2004, he featured in the television series, Huff as Russell Tupper until 2006.

Lately, he contributes his voice for the 2020 surrealist psychological thriller film, I’m Thinking of Ending Things along with Jessie Buckley, Jesse Plemons, Toni Collette, and more. The film is based on the 2016 novel of the same-named by Lain Reid.

Furthermore, some of his notable films and television series are,

– In 2008, he nominated for Outstanding Performance by a Male Actor in a Television Movie, The Bronx Is Burning (2007).

– He nominated for Outstanding Performance by a Cast in a Motion Picture, Frost/Nixon in 2009.

To date, Platt hasn’t been part of any sorts of rumors and disputes that create headlines in the media. Also, he stays miles away from controversial acts that could hamper his personal and professional life.

Merkerson’s main source of income is his profession as an actor. As of 2021, he has accumulated a net worth of around $4 million dollars. Further, his salary, yearly income, and real estate are still under review.

The actor stands at the height of 6 feet 4 inches tall. He has a grey hair color with a brown pair of eyes. Further, there is no information available regarding his other body measurement.