Olivia Culpo is married. She exchanged vows with Christian McCaffrey. But their wedding details are not disclosed.

Previously, she was in a relationship with singer and musician Nick Jonas from 2013 to 2015. Later, she dated football players Tim Tebow and Danny Amendola in 2016. She separated from Danny in 2019 and after their breakup, Danny criticized Olivia as Fishbowl lifestyle’.

The social media actions stated that she meant to notice on the internet and in Hollywood to make money. Currently, she is living her single life. 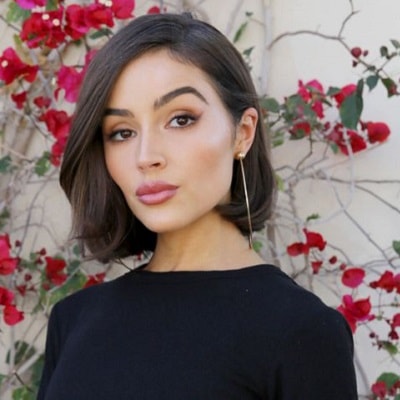 Every day is a blessing.

I think the pageant system is about empowering women. I think that aspect of it is great, but when you take parents who are forcing their children to do anything, I don't think it's healthy.

I was studying communications and acting, and I decided over the summer that I wanted to work on my acting skills and perform in a pageant. I didn't have any other way of practicing, so I entered the Miss Rhode Island pageant. I ended up wearing a dress that was a $20 rental. It was too short, and there was a hole in the back of it.

Who is Olivia Culpo?

She was born on May 8, 1992, in Cranston, Rhode Island, USA. her birth name is Olivia Frances Culpo and she is currently 27 years old. She was born to mother Susan Culpo and father Peter Culpo.

Her father co-owns Paris café and The Lower Depths Tap Room. She has two older siblings and they are named Peter and Aurora. Also, she has two younger siblings: Sophie and Gus.

Olivia holds American citizenship but her ethnicity is a mix of Italian and Irish.

For her education, she joined St. Mary Academy-Bay View and later joined Boston University. After that, she studied cello in the second grade and played different instruments.

In addition, she joined the Brevard Music Center, in Brevard, North Carolina, for two summers.

Olivia Culpo was by the Boston modeling agency Maggie, Inc. in 2010. She came into the limelight after she won the Miss Rhode Island USA competition in 2012. In addition, she increased her fame after she was crowned Miss USA 2012 on June 3, 2012.

Similarly, she represented Miss USA in the 2012 Miss Universe pageant and won the competition making her the first Rhode Islander to win the Miss Universe title.

After winning the title, she had to travel a lot from Indonesia to Bali, Russia, Ecuador, Morocco, The Bahamas, Canada, England, and India, among others.

Furthermore, she has made her appearances in magazines/brands including ‘Sports Illustrated Swimsuit Issue’, ‘Maxim’, ‘L’Oréal’, and ‘Kipling’.

She was awarded Festival Award at the Northeast Film Festival, the US in the category Best Ensemble Cast for ‘American Satan’ in 2017.

She has an estimated net worth of around $7 million and she has earned that sum of money from her professional career.

Rumors are swirling that she is in a relationship with famous DJ Zedd but neither of them has talked about the rumor.

Olivia Culpo has a height of 5 ft. 5 inches and weighs 52 kg. Olivia has dark brown eyes and dark brown hair.

Top 10 Best Pictures Of Super Bowl 2020 You May Not Want To Miss! From Cardi B and Offset’s appearance to Jeniffer Lopez and Shakira, know it all here