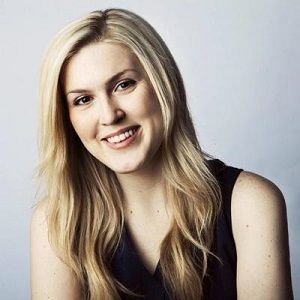 As of now, there isn’t any information regarding Olivia’s relationship. It seems like, she has managed to put her personal life out of the limelight. Even if she is having a relationship with someone, she has kept it very private.

However, according to her Instagram profile, she uploaded a picture of her holding a guy mentioning him as her valentine. She might be having an affair with that guy but there is no information about him and their dating details.

She is good friends with Chief Washington Correspondent Ryan Lizza.

Who is Olivia Nuzzi?

Currently, she works for New York magazine, reporting Donald Trump’s presidential administration. Back in 2014, Olivia has also worked for The Daily Beast.

She has also written for several popular magazines such as  GQ magazine, Politico Magazine, and The Washington Post.

Olivia Nuzzi was born to Kelly Nuzzi and John Nuzzi on January 6, 1993, in New York City, United States. She spent her early life and was raised in Red Bank, New Jersey. Her mother, Kelly Nuzzi still lives there and her father’s name is John Nuzzi, who died in December 2015. However, her father served in the city’s Department of Sanitation for 20 years.

Olivia has a brother named Jonathan and she does not have any sister. She had a keen interest in writing and wanted to become a journalist from her childhood.

Talking about her educational background, Olivia attended the local high school in New Jersey. Furthermore, she completed her graduation from Fordham University.

Initially, Olivia started her writing career as a monthly political columnist for the tri-CityNews weekly newspaper in 2011. At that time, she was still in her high school in New Jersey. Olivia got huge recognition as an intern with the Anthony Weiner New York City mayoral campaign. She was in University at that time. Apart from that, she was hired and served as a full-time staff writer for ‘NSFWcorp magazine.

After working for NSFWcorp for a couple of months, she got an offer from The Daily Beast in 2014. She was still doing her graduation from Fordham University. At her time in The Daily Beast, Olivia widely spread the cover of the presidential campaigns of Rand Paul and Chris Christie as well as Donald Trump’s political rise. New York Magazine offered her to be the magazine’s Washington correspondent. She joined there in February 2017. Olivia is also the writer of Politico Magazine, GQ magazine, Esquire magazine, and The Washington Post.

Olivia has earned an attractive amount of salary from her writing career. She has probably a net worth of millions $300,000. However, there isn’t accurate information on her net worth yet.

Olivia has become a renowned name in the field of journalism. She has added a couple of popular achievements and awards in her journalism career. Politico ranked Nuzzi one of the “16 Breakout Media Stars” of the presidential election in November 2016. In December 2016,  Mediaite awarded her as one of 2016’s “most influential” people in news media.

Olivia faced controversy when Anthony Weiner’s spokeswoman called her a “slutbag.” After the mega news came, Anthony Weiner’s spokeswoman Barbara Morgan apologized to her. The news came up when Olivia was working at NSFWcorp. Her name also added as a racist as the rumor come that she demeaned Danney Williams. However, she denied the news telling it wasn’t anything like that.

Olivia’s height is 5 feet 7 inches and her weight is 52kg. Furthermore, her hair color is blonde and her eye color is dark brown. Her dress size, shoe size, etc. are unknown.

Furthermore, also find out more about the early life, career, net worth, relationships, and controversies of political journalists like Suhana Meharchand, David Corn, and Julia Baird.