American actor and director famous for his role as 'Adam Rhodes' in the CBS comedy Rules of Engagement (2007-2013).

Oliver Hudson is a married man since 2006. He started dating Erinn Bartlett, an actress in 2002. After being in the relationship for four years, they decided to get married. They were married on June 9, 2006, in Cabo San Lucas, Mexico. They are together for a long period of time but their relationship is still very strong and there is no sign of divorce at all. They are living happily with two sons, Wilder Brooks Hudson and Bodhi Hawn Hudson, and a daughter, Rio Laura Hudson. 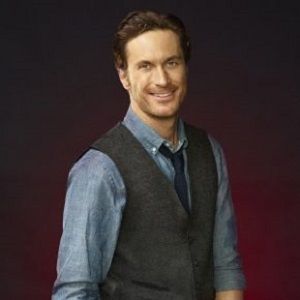 Blood relatives often have nothing to do with family, and similarly, family is about who you choose to make your life with

Father or stepfather - those are just titles to me. They don't mean anything

Who is Oliver Hudson?

He is the son of singer and songwriter, Bill Hudson(father) and Goldie Hawn(mother), an actress. His younger sister Kate Hudson is an actress. He also has two half-siblings from his father’s previous affair. His parents divorced in 1980 and after that, his mother married Kurt Russell, an actor. He and his younger sister Kate were raised in Colorado by his mother and step-father.

Hudson was influenced by his father’s musical background. He liked rock music since his early days. He was also interested in acting since his childhood and his mother inspired him to make his career in acting.

After college, Oliver moved to Los Angeles in 1996  in order to pursue his career in acting. He worked as a production assistant on the set of Executive Decision in 1996 and also attended several auditions. His acting career began in 1999 appearing in the comedy movie The Out of Towners along with his mother. His performance in the movie earned him roles in several movies including Going Greek and The Smokers.

Oliver won Teen Choice Awards- Choice Movie Actor: Comedy for his work in Going Greek in 2001. In 2002, he was listed as 50 Most Beautiful People according to People magazine.

Oliver Hudson: Salary and Net Worth

Throughout his successful career, Hudson has accumulated a net worth of 10 million dollars as of 2022, but his salary is not revealed yet.

Oliver recently joked about rumors of Brad Pitt dating his sister, Kate Hudson. Oliver has never linked up with other girls and there are no rumors of him involving in any extra-marital affairs.

Oliver Hudson has a height of 6 feet 1 inch. His body weighs 81kg. He has black hair and hazel eyes. His shoe size is 11(US). Furthermore, there are no details on his dress size and other body figures fact.