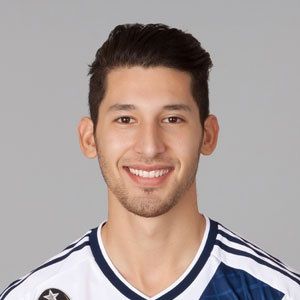 Omar Gonzalez is a married person. He got married on March 26th, 2014 after engaging in February 2014 with Erica Gonzalez.

They have managed to carry their relationship very sweetly and living together for more than three years. There aren’t any extra affairs of Omar to date. Omar and Erica are enjoying their company since their marriage.

Who is Omar Gonzalez?

He was born to Adrian Gonzalez (father) and Maria Gonzalez (mother) on October 11, 1988, in Dallas, Texas, United States. He has three siblings. His parents are Mexican and later migrated to the United States.

Talking about his childhood, Omar grew up in Dallas with his three siblings after his parents moved there from Mexico. His mother was a teacher in a children’s school.

Concerning his education, Omar joined Dallas Texans Soccer Club and later enrolled at the University of Maryland, College Park. He managed to win the 2008 College Cup championship for Maryland.

Omar Gonzalez started his youth career representing Dallas Texans from 2001-2006 in a youth team. He joined Maryland Terrapins in the year 2006 where he made an appearance in 69 games and scored seven goals. His professional career began when Omar was picked up by the MLS franchise LA Galaxy in 2009.

Omar scored his debut goal on April 4, 2009, against Colorado Rapids and also named MLS Rookie of the Year in the year. In January 2012, he was transferred to 1. FC Nuremberg on loan. As soon as he moved to the new club he suffered a ligament injury in his left knee in the training session so that he returned to the U.S for his surgery.

Omar again became the Galaxy player in 2013 and played until the end of 2015. Moreover, he made a move to Pachuca ending his seven years career in LA Galaxy, on December 22, 2015. He assisted his team to become the Liga MX champion in his first season. Omar was the key defense for his team to secure the title.

This player joined the Atlas club in 2018-19 on a loan basis and then was signed by a Canadian team Toronto FC in June 2019.

Omar Gonzalez made his international debut for the U.S. on August 10, 2010, against Brazil. He was the main man behind the draw against Mexico in a World Cup qualifier match. Omar was also on the 23 men squad for the 2014 FIFA World Cup, where he started against Germany in the final group match.

He has also played for the Gold Cup for his country alongside defender Kellyn Acosta.

Omar has achieved a lot of success in his sports career. He bagged an award as MLS Rookie of the Year in 2009 when he just started his professional career for LA Galaxy.

This player’s net worth is estimated at around $1 million. Moreover, his salary as a soccer player is around $860k per year.

The American soccer Ace is doing his job without affecting others. Omar never belongs to any controversy in his professional and personal career. Omar is one of the finest player U.S soccer have ever witnessed.

There aren’t any rumors relating to Omar. He is carrying his career fluently without being a headline for any cause.

Omar Gonzalez has a height of 6 ft 5 inches. He has a good physique with an impressive personality and weighs 93 kg. He has dark brown eyes and his hair color is black.

Being an American Soccer player, Omar is active on social media.