Omar Gosh is a Youtuber personality who posts adventures, pranks, vlogs, and paranormal videos on his YouTube channel OmarGoshTV and Omar Gosh Tv Vlogs. He is currently dating.

Omar Gosh is currently dating Tiphanie who is a mother of two children. She has a daughter named Arizona and a son named Boston.

Omar has two sons Ethan, and Max, and one daughter Melia from his previous wife Melissa. The former couple has divorced in 2018.

His eldest son was born on Nov 27, 2002. Also, he has made YouTube videos with his kids. He was seen teaching Spanish to his daughter Melia in one of his videos.

His former wife Melissa has a YouTube channel named Melissa3Vlogs which has around 24.6k subscribers. 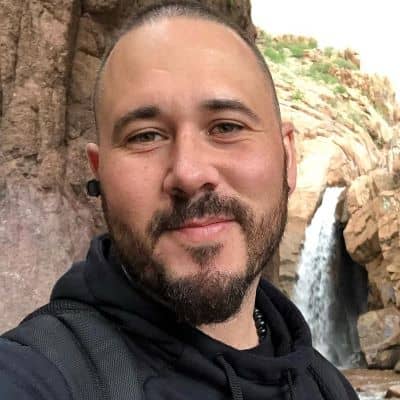 Who is Omar Gosh?

He was born in Tampa, Florida, USA on March 14, 1982, with the birthname Marco Antonio Escobar. The 39-year-old YouTuber belongs to the Caucasian ethnicity and has a Pisces zodiac.

Omar Gosh’s parents nurtured and raised him in Tampa, Florida but managed to keep their identity hidden from the public. Also, there is no news regarding his siblings.

Gosh enrolled in the University of South Florida, a public research university in his hometown, and majored in videography film.

First, Omar Gosh is a popular YouTuber with Two famous YouTube channels. He has a self-titled YouTube channel OmarGoshTV from 2011 which used to be a prank channel but now is containing paranormal videos. Second, he started with a second channel The Omar Gosh Vlogs (2013) for Vlogs and extra footage from his main channel.

The Youtube channel has 4.04 million subscribers and has 610 uploads to date. The channel has garnered 65 million views among which NOT HAVING ENOUGH MONEY EXPERIMENT – FAITH IN HUMANITY… has received a maximum number of views(15M).

In the beginning, he got noticed when Omar filmed a video going around and handing out socks, shoes, and flip-flops to the homeless with his son, inspiring others in June 2014.

The video was uploaded on 2015 May 21 and it is about the kindness one holds to the poor. They pretend to be poor and buy items in a grocery store, or cafe, and those who help get $100 in return as the gratitude of thanks to the humanity they behold.

There are 1088 uploads on the Vlogs channel with 1.02 million subscribers. The channel has accompassed 137 million views amidst which SECRETLY Filming DOG & CAT Shelter (VERY EMOTIONAL… has received 3.7 million views, making it the highest viewed in the Channel.

The channel’s other most loved videos include

He has tee spring merchandise where he sells clothing items, mugs, phone covers, and jeggings starting from an affordable price range of USD 6.

Omar Gosh contributed to many needy people having disabilities by raising funds via their PayPal accounts. The search result of Omar Gosh’s disability redirects you to a YouTube video regarding the wheelchair journey of Aye Marie and the fundraiser where he has mentioned The Omar Gosh Vlogs.

As of 2022, Omar Gosh has an average earning of $150k- $400k annually from YouTube, video views. He also earns from AdSense, band collaboration, and Tv merchandise and has an estimated net worth of around $ 3 million.

He has a height of 5 feet and 10 inches. Omar Gosh has an average body weight and has tattoos on his arms. Additionally, he has a fair body complexion that features his black hair and hazel eyes.

Besides this, there is no information regarding his chest-waist-hip measurements, dress, biceps, and shoe size.

Regarding his social media presence, he is available on Instagram with the username @omargoshtv with 1145 posts and 371k followers. He also has 149k followers on Twitter and has a 69k fan following on Facebook as well.