Updated On January 29, 2023 | Published By: Paristha Acharya
Share this
Single 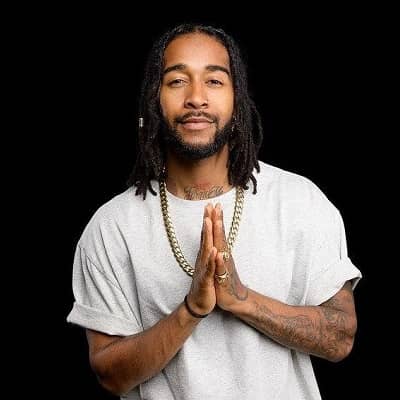 How would I treat a girl if she was my girlfriend? I'm a really affectionate person and I like being a gentleman.

You could live it up and be successful, but it wouldn't mean anything without love and friends. I could go broke and still be happy because love is all I need.

What is the relationship of Omarion Grandberry?

Omarion Grandberry is rumored to be dating his co-star Nia Long.

The two sparked romance rumors after being spotted walking hand-in-hand together at the Los Angeles premiere of Long’s latest film, You People.

The new romance speculation comes a month after Nia split with Ime Udoka. However, she denied the rumors.

Previously, he was in a relationship with singer Apryl Jones from 2013-2016. This couple together has two children.

Who is Omarion Grandberry?

Grandberry was born on 12 November 1984, in California, the United States with a birth name Omari Ishmael Grandberry.

His father‘s name is Trent, and his mother‘s name is Leslie Burrell. He has six siblings named O’Ryan, Amira, Arielle, Tymon, Ukil, and Kira.

His younger brother O’Ryan is also an R&B  singer. He attended Hamilton High School. He belongs to All-American descent.

Earlier, Omarion Grandberry worked in commercials for Kellogg’s Corn Pops, and McDonald’s. He used to work as a background dancer for the R&B girl group Before Dark.

The same year, they released their second album Pandemonium in December with their most supported single ‘Bump, Bump, Bump’, which reached #1 on the Billboard Hot 100.

Grandberry in collaboration with Bow Wow released an album Face Off in 2007. The album was certified gold by the RIAA. This album contained Girlfriend and Hey Baby which went hit.

He signed EMI and created his own label StarrWorld Entertainment in 2010. Afterward, he released the single I Get It In and Speedin. This singer released his third album ‘Ollusion‘.

In 2010, Omarion became a judge of America’s Best Dance Crew. The next year, he released his first mixtape The Awakening 11 May 2011. He collaborated with a Japanese star Koda Kumi for her song Slow in 2012.

The same year, he released his debut EP Package. Grandberry also released his second EP Care Package 2 on 5 November 2013. The next year, Omarion released another album Sex Playlist on 2 December 2014 containing hit singles like ‘You Like It’, and ‘Post To Be’.

Afterward, he stated that he wanted to open a dance studio by the end of a year in 2015 June. Grandberry reformed to go on The Millenium Tour from 2019-2020. Later, in 2020, he released his single Can You Hear Me? featuring a guest appearance of T-Pain.

In addition to music, he also appeared in several films including You Got Served, Fat Albert, The Proud Family Movie, Feel the Noise, Somebody Help Me, and The Wrong Side of Town. You Got Served was his debut film released in 2004.

He made his television debut in 2004 with a sitcom The Bernie Mac Show as ‘Shonte’. Omarion has starred in a various TV sitcom and series like One on One, Cuts, Kourtney and Khloe Take Miami, Let’s Stay Together, and Love and Hip Hop: Hollywood.

How much is the net worth of Omarion Grandberry?

The average salary of Omarion is estimated at $1.9 million. Meanwhile as per 2023’s data,  according to some sources, he has an estimated net worth of $8 million.

There is no rumor and scandal of this singer. Meanwhile, he has managed to keep himself out of any rumor and controversy. He is doing great in his career.

How tall is Omarion Grandberry?

Similarly, he has his own YouTube channel with 1.7 million subscribers and over 1.1 B total views.