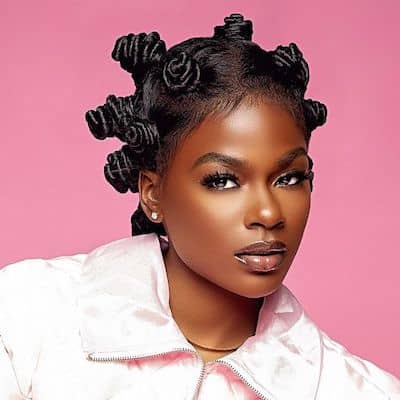 Quick Facts of Omeretta the Great

Relationship Facts of Omeretta the Great

Omeretta’s relationship status is possibly single. She has not shared the details of her affair or boyfriend.

Who is Omeretta the Great?

Omeretta the Great is an American musical artist. She is known for her albums such as Welcome to the Jungle, Black Magic: A Dose of Reality, and more.

Moreover, she is associated with the hip-hop/rap music genre.

She was born on 20 June 1996 in Atlanta, Georgia, United States. The name of her father and her mother’s name is behind the curtain.

Her ancestry is All-American and talking about her academics, she passed out from a high school.

She also joined college but left her studies to pursue a musical career.

Omeretta as a hip-hop artist has released several albums and songs. Her album Black Magic: A Dose of Reality was released in 2016 via Omeretta Records. Her recent project was titled Welcome to the Jungle which came out in 2019.

Her songs “Zero F*cks,” “No More Love” and “Show Me Sum” have received lots of love and appreciation from listeners.

Omeretta the Great- Net Worth, Salary

At present, her estimated net worth is around $1ook US. Further, her salary from her career is not yet disclosed.

This pop rapper is keeping herself away from rumors plus scandals at present.

Regarding Omeretta the Great’s body features, her height and her body weight are average. She has dark brown eyes and her long hair is black.

Her body stats and her shoe size are unknown. She dyes her hair in brown, red, and blonde colors.

She is officially active on social networking sites but not on Facebook. She has more than 241k followers on Twitter.

Where is Omeretta the great from?

Who is Omeretta the Great signed to?

What season of Love and Hip Hop is Omeretta on?

Everything to know about rapper Omeretta the Great!