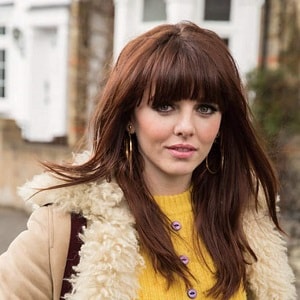 “The '60s look wasn't something I consciously chose, but in my late teens, I found myself styling my hair in a retro way and liking clothes - the shapes and silhouettes - that were from that era. They just reflected who I was.”

Ophelia Lovibond is currently single. She has not revealed any information about her dating life and about her relationship. However, it is heard that she had an affair with Tom Hughes in the year 2001 but neither of them has confirmed.

Who is Ophelia Lovibond?

Ophelia Lovibond is an English actress and she is best known for her roles in ‘Gurdians of the Galaxy’ as Carina and in ‘W1A’ as Izzy Gould. She has also been featured in the movies, London Boulevard (2010), No Strings Attached (2011), etc.

She was born on 19 February 1986 in Hammersmith, London, England. Her birth name is Ophelia Lucy Lovibond and nickname Fifi. Her birth sign is Pisces. She was raised by a single mother in Shepherd’s Bush, London.

Her mother used to work as a Chartered Psychologist at Wormwood Scrubs Prison. She has two siblings, whose names are unknown. There is no information about her father. Her parents separated when she was very young. She holds British citizenship and her ethnicity is English.

She studied Latymer Upper scholar in scholarship and she attended the University of Sussex to study English Literature and graduated from there in 2005 with a first class degree.

She made her first television appearance in ‘The Wilsons’ at the age of 12. To get that role, she lied about her age. She appeared as Izzy Gould in the BBC satire ‘W1A’. She played the role of Kitty Winter in the season 3 of ‘Elementary’ and she reoccurred in episodes 15 and 16 of season 3.

Lovibond debuted in film from ‘Oliver Twist’ in 2005 and she played a part in the John Lennon biopic ‘Nowhere Boy’. Her remarkable films include ‘4,3,2,1’, ‘London Boulevard’, ‘No Strings Attached’ and ‘Mr. Popper’s Penguins’. She portrayed the role of Carina in the film ‘Gurdians of the Galaxy’ in 2014.

She appeared as a lady Alexandra Lindo-Parker in the series ‘Hooten and The Lady’ in 2016 and in the meantime, she also appeared as Elizabeth Barry in ‘The Libertine’.

It seems she has not been awarded and nominated yet for her profession but we can expect some awards for her work in the future.

Ophelia Lovibond: Net Worth and Salary

It is predicted that she has a net worth of around $2 million and her main source of earning is from her acting career.

There was a rumor regarding the separation of Ophelia with her boyfriend Tom Hughes and the reason was that he cheated on her with dating Jenna Coleman. But neither the relation between Ophelia and Tom is confirmed nor between Tom and Jenna Coleman.