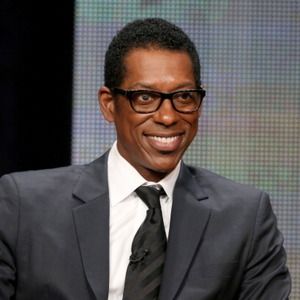 Most of my friends between 21 and 31 are at different stages of figuring out what the hell they are going to do with their lives. It's a big part of our generation. What is the next step?

I want to see as many black professionals as possible.

Someone I met years ago explained to me the difference between a personality and an actor, a personality being Eddie Murphy or Roseanne Barr, and an actor being Morgan Freeman and Alfre Woodard or Marlon Brando.

That was one of the things that interested me about the character. He doesn't want to be a hero, and has no real desire to save the earth or discover aliens. He's sniffing around looking to see what will fall in his lap.

What is the relationship of Orlando Jones?

Orlando Jones was dating Jacqueline Staph who is a former model. After being in the long relationship, Jones proposed Staph in 2008 with a nearly century-old platinum engagement ring. They got married on January 2, 2009, at a private ceremony at the Hotel Bel-Air in Los Angeles. The couple is blessed with a daughter.

Who is  Orlando Jones?

Orlando Jones is one of the most popular American comedians and actors. He is popular for his role as the 7 Up spokesman from 1999-2002. He is an original cast member of the sketch comedy series MADtv. His works in Father of the Pride, The Adventures of Chico and Guapo, Black Dynamite,  Runaway Jury, and various others are very popular and it is the reason to build his recognition.

He completes his studies at Mauldin High School in 1985. Then he attends the College of Charleston, South Carolina but no sooner drops out in 1990.

Jones first began his career as a writer and story editor for television on A Different World and Roc. Working there he formed a production company named Homeboy’s Productions and Advertising. He opened it along with comedian Michael Fechter. Both of them work on several projects and are associated with various brands. So the duo’s collaboration was outstanding. Furthermore engaging in the film industry’s works in 1987, he gets the chance to enter Hollywood. He gets his first Hollywood job in NBC comedy, A Different World as a writer., He also comes in the season five finale as a small guest appearance.

After that, he started to compose various series including the Fox series, Roc in 1991-92. Likewise, he co-produced The Sinbad Show. He has starred in the MADtv in 1994. After her performance in the movie, his fame grew up more as the series was also commercially successful. But after its two seasons, he left the show to pursue his movie career.

After MADtv, he performs in a variety of popular films. In 1991, he made his big-screen debut in  In Harm’s Way. But his appearance in the movie was uncredited. Then in 1998, he starred in the Sour Grapes where he played the role of an itinerant man. He afterward gets various of the big projects. Some of his notable films include Woo in 1990, Mike Judge’s Office Space in 1999,  Magnolia in 1999. His fame uplifts due to his roles in movies like The Replacements in 2000, likewise, The Time Machine in 2002, Runaway Jury in 2003, and so on.

Not only does he show his talent on the big screen but also on various Tv shows. But he was more like in his humorous commercials for soda companies rather than TV series and gained much recognition from there. In 2000, he was able to collect international fame when became the spokesperson for 7 U pan. He also gets the opportunity to host an HBO First Look special in 2000 and then again in 2003, he featured on The Bernie Mac Show and on Girlfriends.

Jones also earns a lot of fame for his voice providing. As he has given his voice in various animated films and TV series. In 2004, he lent his voice to the NBC anime TV series, Father of the Pride.  He was also hired as a principal actor in the FOX television series Sleepy Hollow in 2013.

Jones has always performed outstanding performance in various fields. But he hasn’t received any awards yet.

Orlando Jones: Salary and Net Worth

Jones has performed in various fields and must have good earnings. His net worth is $ 5 million as of 2022.  He earned between $500k-$900k for his appearances on Television and films. He made more than $50k from voice-over.

He was engaged in a controversy, when he made a Twitter joke, predicting Sara Palin’s (a vice presidential candidate) and former Alaska Governor’s death. He, however, gave an apology many days after.

Orlando stands tall with a height of 6 feet. His weight is not known. He has dark black colored curly hair and black colored eyes.

The Rumor of Nina Dobrev dating Orlando Bloom is False!! They are ‘Just Friends’ Not more than that!

Nina Dobrev and Orlando Bloom captured romantically hanging out; Are they dating, Scroll down for all you wanna know about their relationship