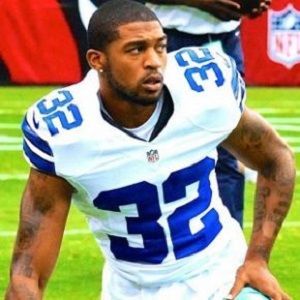 Orlando is engaged as of now. Currently, he is the fiancé of actress/model/fashion designer, Draya Michele. The couple started dating in July 2013. After that, they dated for a couple of years.

And finally, they got engaged on August 21, 2015. They have had on and off in their relationship. But as of now, they are living happily enjoying each other’s company. They have a child together named, Dru. Dru was born in 2016.

Who is Orlando Scandrick?

California-born Orlando Scandrick was born as Orlando Lee Scandrick on February 10, 1987. The talented Orlando is a professional ‘American football’ player. He is popularly famous for his incredible performance in the field.

In his early amateur career, he played for the ‘Boise State Broncos football team’. Presently, he is a prominent figure among the fans playing for Dallas Cowboys of the National Football League. He plays at the cornerback position.

Orlando was born in Torrance in the state of California born on February 10, 1987. He possesses American nationality and his ethnicity is Afro-American.

His mother’s name is LaTonya Scandrick. He grew up in his home state. Football intrigued him from an early age. He grew up with a passion for American football. Later, this influenced his career to be a professional football player.

Orlando started his football career since his high school days. During his junior year at Boise State University, he played in 38 out of the total 39 games. Additionally, he completed 152 tackles, 3.5 sacks, 5 forced fumbles. He kept on working hard and improving in his every game. His hard work paid off and Dallas Cowboys signed him. He had some rough seasons. But he pulled back off with his good game.

During his career at Dallas Cowboys until 2014, he completed 42 Interception return yards in 102 games. Additionally, he has defended 52 passes with 1 Interception return touchdown and 7 interceptions until 2014. Furthermore, he has made 322 combined tackles and 291 solo tackles until 2014.  He missed the 2015 season because of injury. He tore his Anterior and Medial Cruciate Ligament. This made his listed on the reserved players’ list.

Orlando Scandrick: Salary and Net Worth

As of now, he earns a pretty good amount of salary of around $4.7 million according to Forbes and has a net worth of $17 million.

Orlando is no new to media’s tittle-tattle. Being a famous athlete, he is prone to rumors and controversies time and again. Sometimes, fans and the media criticize him for a single bad game. But it is no new thing to athletes. Presently, there are no rumors that surround his personal and professional life.

Orlando Scandrick has a height of 5 feet. His body weighs 88kg. Besides this, he has black hair and black eyes.

Orlando Scandrick: Salary and Net Worth