Oscar De La Hoya is a boxer and the father of five children. 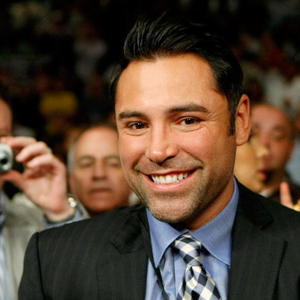 The fight life, that was easy. This is a battle I have every day

When people say I can't or I musn't, I always say I can and I will

There is always space for improvement, no matter how long you've been in the business.

What is the relationship of Oscar De La Hoya?

Oscar De La Hoya is dating Holly Sonders, a sports reporter. The couple met at a boxing match in June where Holly was the host.

Previously, he was married to Millie Corretjer on 05 Oct 2001. The couple is blessed with two children, Nina Lauren Nenitte De La Hoya, and Oscar Gabriel De La Hoya. The couple divorced in 2016.

Previously, he was engaged to Shanna Moakler in October 1997. Shanna was Miss America of that time. The couple is blessed with a daughter, Atiana De La Hoya who was born in 1999.

However, the relationship did not go on a long track, and had been separated in 2000. The split was an expensive one as Shanna sued him for $62.5 million which was half of his income during that time.

Who is Oscar De La Hoya?

Oscar De La Hoya is a former professional boxer who competed from 1992 to 2008. He had represented the United States at the 1992 Summer Olympics, winning a gold medal.

Oscar, also known as “The Golden Boy,” was born on 4th February 1973. Before he was born his parents shifted to Los Angeles in the USA from Mexico.

Oscar belongs to a family of boxers where his grandfather was an amateur fighter in the 1940s as well as his father was a professional boxer in the 1960s.

He began to practice boxing when he was 6 years old and his idol was the Olympic gold medalist Sugar Ray Leonard, who became a celebrity after the 1976 Summer Olympics before going professional.

When he was 15 years old, he won the national Junior Olympic 119-pound title; he took home the 125-pound title the next year.

In 1990, he had won the national Golden Gloves title in the 125-pound division and he was the youngest among all. Next year, in 1991 he was named the Boxer of the Year.

His academic details are not disclosed.

Oscar De La started his boxing career when he was a child. After achieving the title Boxer of the year he entered the International level to fulfill his mother’s dream.

In 1992, he had become a professional boxer after winning his first pro fight in a first-round knockout of Lamar Williams in Inglewood.

Similarly, in 1994, he won the title of the junior lightweight championship of the World Boxing Organization (WBO), with a technical knockout (TKO) of Danish fighter Jimmi Bredahl in the tenth round of the fight.

After working so hard he knocked out the boxer Rafael Ruelas in 5 minutes in 1997. In 1999 he had faced the hard times hitting Felix Trinidad, one of the most anticipated fights of the decade.

In 2000 he released an album on the EMI/Latin label in both English and Spanish language which was nominated for a Grammy Award. He again returned to the boxing field in 2001 and defeated Arturo Gatti in the fifth round.

At the age of 28, he was the youngest boxer ever to have won five world titles. But in 2004, he lost the middleweight title fight to Bernard Hopkins.

And then from 2006, he has been preparing himself for a life after boxing and expanded his business.

And in 2009 he had been retired from his boxing career. This boxer’s salary is not available through any sources. His net worth is estimated to be $200 million.

In 2013, he announced that he was returning to a drug and alcohol treatment facility thus missing the biggest fight of his young fighter’s career. But in January 2017 he was arrested for driving under the influence in Pasadena, California.

His hair color is black and his eye color is dark brown. His other body measurement is unknown.

How many kids does Oscar De La Hoya have?

Oscar De La Hoya was raped by an older woman when he was 13 years old!