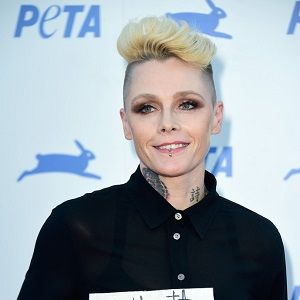 The prominent singer Otep Shamaya is in the longtime relationship with Djosefin Maurer. She may have dated with many boys but there is no information about it.

Who is Otep Shamaya?

Otep Shamaya is a singer, songwriter, poet, actor, as well as an artist. She had supplied lead vocals for Otep, a metal band.

Furthermore, she has even released songs like “Genocide,” which angered Men’s Rights Advocates.

Otep was born on 7th November 1979 in Austin, Texas, United States. She belongs to the American nationality.

Besides this, there is no information regarding her childhood, education, and family.

She had started her career since she made her debut with her band OTEP in 2000.

In 2016, she had unleashed her latest album, “GENERATION DOOM” via Napalm Records which was critically acclaimed album debuted on Billboard at #10 on the Independent Chart, #7 on the Rock Chart, #4 on the Hard Rock Chart and #109 on the Top 200 Albums Chart.

Similarly, she is also featured in The Hobbit: Battle of the Five Armies. Then she had released her first edition of short stories titled “Movies in My Head” in 2015. In 2006, she had self-published the first printed collection of poetry as well as illustrations.

Furthermore, she was a GLAAD Nominee for Outstanding Music Artist in 2010. Additionally, she has earned a net worth of $4 million.

There was a controversy that her band had pulled out the upcoming Civil Unrest Tour because the singer of Terror Universal allegedly violently grabbed her crotch on their last tour.

She has light brown hair, has a pair of attractive green eyes, a height of 5 feet 5 inches, and a weight of 56kg. Apart from that, there is not any information regarding her other body measurements.