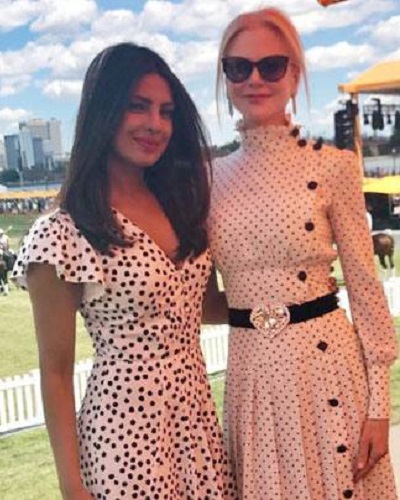 Nicole Kidman is an Australian actress and film producer. Kidman’s discovery roles were in the 1989 feature film thriller Dead Calm and television thriller miniseries Bangkok Hilton. Priyanka Chopra is an Indian actress, singer, film producer, philanthropist, and the winner of the Miss World 2000 pageant. Both actresses are well-known celebrities in Hollywood. Recently, both gorgeous and stunning actresses attended the 10th Annual Veuve Clicquot Polo Classic at Liberty Park in Newark, New Jersey. Scroll to find out their Twinning moment.

They attended the 10th Annual Veuve Clicquot Polo Classic at Liberty Park in Newark, New Jersey. While in the event both appeared in typical A-list form, they did so in modern and parallel style.

Priyanka matched the midi-length sundress with chunky Gianvito Rossi heeled sandals. While Nicole came in a high-neck Alessandra Rich dress. In addition, she embraced her look with the Stuart Weitzman shoes and a belt with a heart-shaped buckle.  Both dresses were patterned with polka dots, which is the latest feminine pattern.

We got the memo.. lol @nicolekidman #twinning ?❤️

The leading ladies were definitely on the same wavelength when they got clothed. While their matching style wasn’t dropped on Chopra. Chopra also shared the snap of her with Nicole with the caption which reads:

While she was invited to the Golden Globes this year, she had the perfect wear for the red carpet event. Talking about her dress, she then said:

“I really wanted to be gold. I know it’s cliche, but I just did,

Also Read Beach Babes in the Bikini! Priyanka Chopra walks around with Adriana Lima around the beach on a swimsuit

As she has attended many award functions, she comes into the category of the best dressed. She also opened up about her favorite feature, she jokingly said:

“My hair is my superstrength. I become less strong when I cut it.”

Once, Chopra told to Allure Magazine:

“I’m very fond of colors on my mouth, but I don’t like looking like I’m wearing too much lipstick. So I prefer to wear lipsticks like stains, almost, so they don’t feel unnatural or as if they are painted on,”

Chopra opened up about her style in an interview with Us Weekly. She said:

“I think style always evolves, right? As you go along, as you grow up, your experiences change and your experience sort of dictate what your style is going to be,” 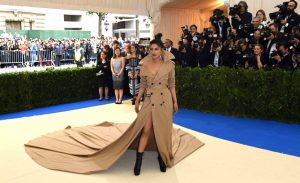 Chopra set the color on the coat and left it unbuttoned to give a sexy look. To give her appearance the ultimate look she had with silver earrings, black booties, and smoky eye makeup. Further, she pulled her hair into a messy topknot to give a perfect match to her sexy look. The longest trench coat in the world made quite a statement which is now being hailed. Similarly, talking about the gown, Priyanka completely owned the beauty of her dress. Everybody’s eyes were into Chopra, none could stop staring and talking about her. Read the full story here:

One of highly paid and Padma Shri honored Priyanka Chopra is an Indian actress, singer, model, film producer, and philanthropist. She is best known as the winner of Miss World 2000 pageant. She is commonly also known for her role as Alex Parrish on the ABC thriller series Quantico. See more bio…