Who is the wife of Paddy Considine?

Paddy Considine is married to Shelley Insley, with whom he had been in a relationship since he was 18 years old. The couple tied the knot in 2002 and has been together ever since. Considine’s family still resides in his hometown of Burton upon Trent.

Together they have three adorable children from his marriage to sweetheart Shellye, including a son, Joseph Considine. However, the couple has not yet revealed the identities of their two children to the media. 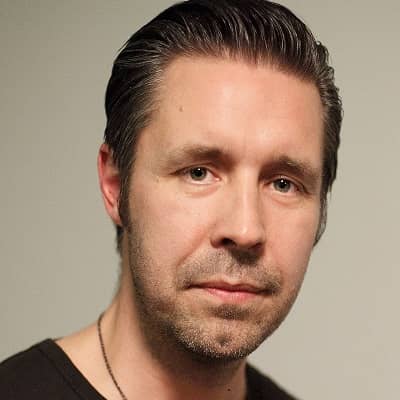 We have to accept the hurt and the misery as real. It's all around us, and you can be watching the evening news one night, telling you about a lady who was beaten to death, and then they try to cheer you up at the end with the shot of a dog on a surfboard. I find this offensive

I worry. I worry we're losing our humanity. That's why I feel a need to explore these people. There has to be some sort of redemption, some resolution. I have to believe that. Otherwise, life is just a series of bad events.

Who is Paddy Considine?

Paddy Considine is a British actor. Shane Meadows, a filmmaker, and director, with whom he frequently collaborates.

With a succession of performances in independent films in the early 2000s, he rose to popularity. In 2007, he directed Dog Altogether, an award-winning short film.

Paddy was born on September 5, 1973. He was born in the Staffordshire town of Burton upon Trent, where he still resides. Talking about his nationality, he holds a British identity.

He grew up in a council estate in Winshill, Burton, with his brother and four sisters. Martin Joseph Considine, his father, was Irish. His mother’s name is not disclosed yet.

Considine went to Abbot Beyne Senior School and Burton College, among other places. He enrolled at Burton College in 1990 to pursue a National Diploma in Performing Arts.

He left to study photography at the University of Brighton in 1994. During his time there, he studied under social documentarian Paul Reas, who praised one of Considine’s projects, portraits of his parents at their Winshill home, as “fucking wonderful.” He graduated with honors and a first-class B.A.

Paddy met the director, Shane Meadows when he was a teenager. He cast Considine in his first role in a feature film as the disturbed character Morell in A Room for Romeo Brass (1999). He was cast in Pawel Pawlikowski’s Last Resort (2000) the year after for his performance in that film.

Paddy has had a number of scene-stealing supporting appearances in films such as 24 Hour Party People (2002), Born Romantic (2000), and The Martins, in addition to his starring performances (2001).

Considine is known for his roles as Richard, the spiteful brother, in the critically acclaimed film Dead Man’s Shoes (2004), which he co-wrote with Shane Meadows, and Phil, the Born Again Christian, in Pawlikowski’s My Summer of Love (2004). Considine co-starred in Cinderella Man starring Russell Crowe and Renée Zellweger in 2005.

Considine and Shane Meadows formed the band She Talks To Angels (inspired by the Black Crowes song of the same name) with friends Richard Eaton, Simon Hudson, and Nick Hemming (later of The Leisure Society) after a short tenure in a virtual comedy thrash group called ‘Grunt’ during college, with Meadows as vocalist and Considine as a drummer.

After Paddy left the band, the remaining members reformed as Oslo. While Considine had moved on to study photography at the University of Brighton, where he formed a new group, Pedestrians, he appeared on Jools Holland’s show.

Tim Burgess of the Charlatans invited Considine and Riding the Low to perform at his curated Tim Peaks Diner event at Festival No 6 in Portmeirion, Wales, in 2014.

Considine, who was in his 30s at the time, revealed in April 2011 that he had Asperger syndrome. Despite being initially relieved by the diagnosis, he continued to struggle in social situations until clinician Dr. Andrew Barton-Breck suspected he had Irlen Syndrome.

Helen Irlen herself diagnosed him with Irlen syndrome in 2013, a condition in which the brain cannot adequately process visual stimuli. His condition has significantly improved since he began wearing purple Irlen filters.

According to celebrity net worth, Paddy has an estimated net worth of approx $4million while his exact salary and income are not disclosed yet.

Currently, there are no rumors of Paddy being in any affairs. Throughout his successful career, he never became a part of any controversial issue.

Paddy has a height of 5feet and 11inch and weighs around 75 kgs. He has black colored hair and brown eyes.

Considine has a tall and lean body.

Almost 7k people have followed him on Facebook. Whereas, he is not seen much active on Youtube and Tiktok.