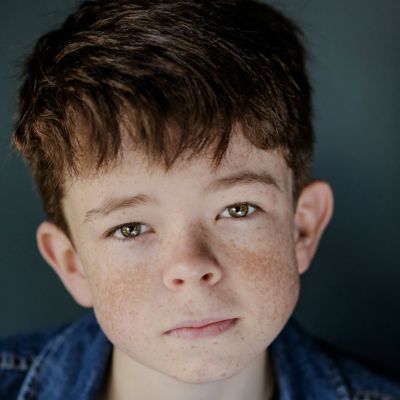 Talking about his love life, Paddy Holland is presently single and he is not dating anyone at the moment. He is too young to involve in any kind of relationship or affairs.

Moreover, Holland might be focused on shaping his career and study. It seems he is very private in nature and has not shared his relationship details with the public and media.

Who is Paddy Holland?

Paddy Holland is a well-recognized British movie actor. Holland is widely famed for his role on Holmes & Watson(2018), Ray James and Roses for Lily(2020).

Moreover, he is also famous as the youngest brother of renowned English actor, Tom Holland who has portrayed the role of Peter Parker in Spider-Man.

Paddy Holland was born on 6 December 2004. At present, his age is 16 years old. Likewise, his birthplace is Kingston, England.

Paddy is the son of his father, Dominic Holland whereas his mother is Nicola Elizabeth. Moreover, he has three brothers named Tom Holland and twins brothers Sam Holland and Harry Holland. His eldest brother, Tom is a well-renowned English actor known for his appearance in Spider-Man as Peter Parker. His dad is a comedian and an author by profession whereas his mom is a photographer.

Talking about his nationality, Holland holds a British identity whereas his ethnicity is English, Irish, and Manx.

Regarding education, the actor has not revealed his academic background to the public. He might be pursuing his higher education in the town at present.

Paddy belongs to a talented family whose members are already familiar with the acting industry. Holland started his career with Tom’s directional venture in 2015. He performed in a short comedy movie, Tweet that was released in 2015. Further, he had made several guest appearances in the different shows in 2017.

Holland made his prime appearance in an episode of Entertainment Tonight. It is an American first-run syndicated entertainment TV news magazine. Also, he performed as a tough kid in the 2018 Mystery buddy comedy movie, Holmes & Watson.

Talking about his dad, Dominic is a well-known comedian, author, and broadcaster who has won Perrier Best Newcomer Award. Talking about his eldest brother’s career, Tom is a well-named British actor. He started his career performing the character of Billy Elliot in the stage musical, Billy Elliot the Musical in Victoria Palace Theatre.

Further, he has appeared in several movies such as How I Live Now(2013), In the Heart of the Sea(2015), and A Monster Calls(2016). Tom is widely famed for his character of Peter Parker in the Marvel Cinematic Universe movie, Spider-Man in 2016. Also, he played in Spider-Man: Homecoming and Captain America: Civil War.

An English child actor, Holland has earned a handsome amount of money from his profession at a very young age.

However, the young talent has not disclosed his exact salary, earnings, and assets details till now.

Paddy has never been part of any controversial matter or rumors till now. The actor has been surrounded by his personal and professional life.

It seems that Holland prefers enjoying his personal life and does not want to merge it with his professional life.

16 years old actor, Paddy Holland has dashing looks, an athletic body, and an admirable personality. He stands at a height of 5 feet 6 inches. Also, he has a balanced body weight of 55 kg.

Furthermore, Holland has blue eyes whereas his hair is brown. His chest size is 42 inches and wears a shoe size of 6(UK).

Nevertheless, the prominent star has not revealed his other body details in the public till now.

Regarding his social media presence, Paddy Holland is an active personality on social media. Paddy has more than 582k followers on his official Instagram account @paddyholland2004.

He is also active on Twitter with around 2k followers.

However, the young star is not available on Facebook at the moment.