Paddy McGuinness is also known as Patrick Joseph McGuinness who is an English comedian, comedy actor, television personality, and presenter. He is best known for his roles in Channel 4, ITV, and BBC. He is married to Christine Martin. He is father of three kids. 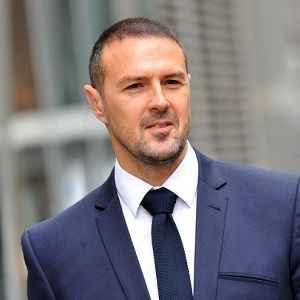 Paddy McGuinness is a married man as he married to a 30-year-old model and a reality Tv star Christine Martin. She was named Miss Commonwealth and also Miss Liverpool at the tender age of 18. Similarly, they met at the Liverpool Tennis Tournament when she was modelling for Liverpool-based boutique Cricket.

Eventually, they married on 4th June 2011 after dating for three years. Their marriage was held on Thornton Manor in the Wirral. They have three children Twins Leo and Penelope in the year 2013 and Felicity in 2016. There were some rumors about their split up but their marriage is back on track. The twins were diagnosed with autism.

Who is Paddy McGuinness?

Paddy McGuinness is also known as Patrick Joseph McGuinness who is an English comedian, comedy actor, television personality, and presenter. He is best known for his roles in Channel 4, ITV and BBC. He also has hosted game shows such as Take Me Out and Benchmark.

He was born on 14th August 1973 in Farnworth, Lancashire, England. He is the son of Joe McGuinness(father) whilst his mother’s name is unknown. Similarly, he has a brother Tony McGuinness. His nationality is British. His parents were Irish. Likewise, his ethnicity is Irish.

Talking about his education, he attended the Mount St Joseph High School. There is no further information about the college and university he attended for his higher studies.

The career of Paddy McGuinness started in television when he made a debut in 1995 as a contestant on the show God’s Gift. Secondly, he appeared in Sky1 show The Match. In the year 2006, he hosted Inside Wayne Rooney. Similarly, on 13th August 2008, he co-starred a TV series Rory and Paddy’s Great British Adventure.

On Channel 4, he guest hosted The Paul O’Grady Show when O’Grady took a week off on 29th November 2006. He has presented Paddy’s TV guide and game show Benchmark. After 2007, he presented Raiders of the Lost Archive, hosted Take Me Out, and This morning. On ITV, he hosted Mad Mad World, Text Santa, Your Face Sounds Familiar and many more.

Some of the other ITV shows were The ABBA Christmas Party, The Keith & Paddy Picture Show, and Celebrity Juice. On BBC he presented Even Better Than the Real Thing, Sport Relief, and Top Gear. His work on the radio was his own show Bauer City 1. Similarly, on 27th November 2010, he starred in the adult pantomime Panto’s on Strike at the Opera House, Manchester with Robbie Williams and Jonathan Wilkes. Further on 2012, he played Gary in Keith Lemon: The Film.

Paddy McGuinness has not received any awards yet. There is no information about his nomination for any awards either.

The net worth of Paddy is $10 million dollars. As he earned all the fortune from his career as a comedian actor and TV star. As the average earning TV host earns $55 thousand a year, he has been working for 20 years. So, he earns a huge amount.

There was a rumor that Paddy McGuinness was giving his wife some space. And he was seen walking arm-in-arm with Nicole Appleton after a night out. There were tweets about their divorce. Other than that there is no much rumors and controversy of Paddy.

McGuinness had right shoulder surgery in the first week of May. And after the surgery, he reveals that he is not able to wipe his bum.

Talking about his body measurements, he has a height of 6 feet 1 inch. While talking about his weight loss and body transformation, he shared that he was 92.7 kg and now he weighs around 88.2 kg. Similarly, he has a great body. His hair is salt and pepper whereas he has brown eyes color.