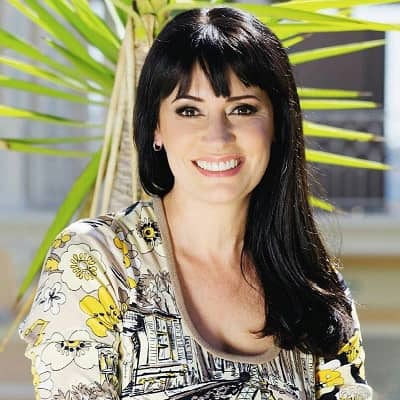 Brewster got engaged to Steve Damstra on March 17, 2013. Via Twitter, she made the announcement by sharing a photograph on her finger of the jade engagement ring.

Who is Paget Brewster?

Paget Brewster is an American singer, voice actress, and actress. She is the first one to pay attention to her appearance as Kathy in the NBC hit show ‘Friends.’ Later she made her debut in the crime thriller series ‘Criminal Minds’ where she was cast as Special Agent Emily Prentiss.

Paget Brewster was born in Concord, Massachusetts, USA, to her parents Galen and Hathaway Brewster on March 10, 1969. She was named after the 1950s actress Debra Paget. Her father was a school administrator and her mother was a government officer. She’s got a younger sibling named Ivan. Brewster was brought up in Massachusetts and later moved to New York City.

She joined the Parsons School of Design. She made her acting debut during her first year and subsequently left the design school to begin her acting career. Brewster moved to San Francisco in the mid-1990s and enrolled in acting courses.
Paget also attended the Jean Shelton Acting Studio.

Brewster began her career in the San Francisco Bay Area with a local late-night talk show,’ Paget,’ which aired between 1994 and 1995. She first rose to fame in 1997 when she was cast as Kathy in the hit show ‘Friends’ on NBC.

She made her film debut in ‘Let’s Talk About Sex’ a year later and voiced Audrey Timmonds in ‘Godzilla: The Series’ as well.

The actress starred in the drama series’ Love & Money ‘and’ The Trouble with Normal ‘in the following years. She also portrayed Ms. Indestructible in the superhero sitcom ‘The Specials’ around this period.

Brewster appeared in Fox’s ‘Andy Richter Controls the Universe’ as Jessica Green from 2002 to 2003. She joined the cast of ‘Huff’ as Beth Huffstodt soon after the show was finished. She launched her voice roles in ‘Harvey Birdman, Attorney at Law’ and ‘American Dad’ in 2005. The actress was cast a year later in ‘Criminal Minds‘ as Special Agent Emily Prentiss.

She also starred in ‘The Big Bad Swim’ that year, an independent flick featuring a group of individuals who participate in the swim class of an adult newcomer.

In 2011, in the animated sitcom ‘Dan Vs.’, Brewster started voicing different characters. Two years later, she started featuring in the ‘Drunk History’ educational comedy series. An alcoholic narrator alongside the host attempts to recount an incident from the past in one of the show’s episodes, as artists perform the narrator’s story. The actress took part in the final season of the comedy sitcom ‘Community’ in 2014.

Her roles in ‘Another Period’ and ‘Grandfathered’ followed this. Brewster has played Della Duck on Disney XD’s ‘DuckTales’ since 2018.

Brewster disclosed on the 30 March 2006 episode of Late Night with Conan O’Brien that she had received a handwritten note saying that Hugh Hefner would like her to pose for Playboy. She took the proposal seriously, but while she claimed she respected Playboy more than magazines like Maxim and FHM and her parents gave her their blessing, she finally declined the offer.

She volunteered with the Los Angeles Teenage Storytellers Program as an actress,

In 2018, for her appearance in Batman and Harley Quinn, she obtained a BTVA Special/DVD Voice Acting Award nomination for Best Female Vocalist in a TV Special/Direct-to-DVD Title or Short category (2017).

In 2014, for her appearance in Batman: The Dark Knight Returns, Part 2, she obtained a BTVA Special/DVD Voice Acting Award nomination for Best Female Vocalist in a TV Special/Direct-to-DVD Title or Short category (2013).

She received the same nomination, In 2013.

Talking about her net worth, after achieving huge success in her career definitely, she has earned a massive amount of wealth. Her estimated net worth is $9 million which she has earned through her hard work and her profession as an actress, voice artist, and singer.

In her long career in the industry of entertainment, she has never been involved or dragged in any controversy or scandals. She always kept her image very clean.

The actress has a kind of hourglass body. Although her weight is 58 kilograms, which is approximately 127 lbs, the height of Paget Brewster is 5 foot 8 inches or 1.73 meters (173 centimeters). Her body is 37-26-37 inches, while the size of her bra is 34C. her dress size is 6(US), she has Dark brown hair and a pair of dark brown eyes.