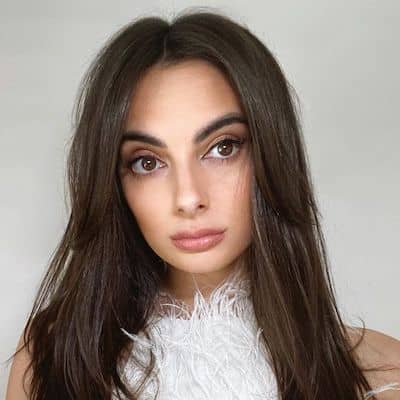 Paige DeSorbo at present is possibly single. She has not disclosed her current affair or boyfriend’s details.

Who is Paige DeSorbo?

Paige DeSorbo is an American TV artist. She is mostly known for her appearance in the TV shows Summer House.

In addition, she is also a podcaster and hosts Giggly Squa‪d with‬ Hannah Berner.

She was born on 06 Nov 1992 in New York, the United States. The name of her Italian father and mother’s name is Gary and Kimberly respectively.

Paige’s ancestry is Italian and talking about her academics, she has attended Holy Names High School.

Then she enrolled at Saint Rose College and achieved a degree in journalism.

Paige DeSorbo is mostly known for her appearance in a reality show titled Summer House. She joined the cast in 2019.

This show is about nine friends who all together live in a summer house in Montauk. Along with Paige, the other casts were Kyle Cooke, Lindsay Hubbard, Carl Radke, Hannah Berner, and more.

Moreover, she is also a fashion who writes for Betches Media since March 2018. Here she focuses on the style of celebrities and recreates them. Her other career timeline is,

At present, her estimated net worth is around $500k US. Also, her salary from her career is not calculated.

This TV star is keeping herself away from rumors and scandals at present.

Regarding Paige DeSorbo’s body features, her height is 5 ft 6 inches and her body weight is 55 kg. She has dark brown eyes and her long hair is black in color.

Paige is officially active on social networking sites but not on Facebook. She has more than 19k followers on Twitter.