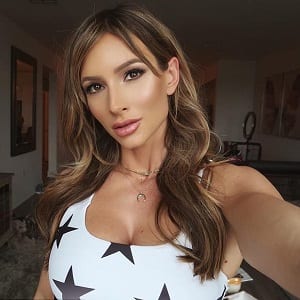 Paige Hathaway was previously in a relationship with the actor as well as a professional dancer, Casper Smart. Casper was Jennifer Lopez’s ex. The pair is currently believed to be separated. At present, Paige is single.

Who is Paige Hathaway?

Hathaway was born in Minnesota on July 31, 1987. She was born to an alcoholic father and a small town mother. Paige lived with her parents until the age of four. Additionally, she later moved from foster home to foster home after her parent’s divorce. Hathaway was passionate about sports as a child and enjoyed playing soccer during her schooling life. She is of American nationality. Furthermore, there are no details available about his ethnic background at present.

Talking about her education, Hathaway has completed her college-level education and has a degree in sports medicine.

Hathaway initially settled in Oklahoma after the age of 17. In addition, she did multiple jobs there to fund her college fees. After she began dieting and trained exhaustively, she began participating in fitness competition. In the Ronnie Coleman 2011 Bikini competition, Paige achieved the 2nd position. Additionally, she became second in 2012 NPC Oklahoma City Grand Prix Class D.

Hathaway became the model and ambassador of the nutrition supplement company ‘Shredz.’ Furthermore, in 2013, she opened her website and began writing fitness blogs where she designed diet and workout charts. Currently, she is famous on the social site Instagram. Additionally, she also has her own YouTube channel.

Hathaway has not been linked with any award nominations in her career. She has not revealed her current salary. Furthermore, there are no details available about her estimated net worth at present.

Hathaway became part of controversy after fans pointed out that she uses Photoshop to edit her pictures on Instagram. At present, there are no rumors concerning her life and career.

Talking about her body measurement, Hathaway has a height of 5 feet 4 inches (1.62 m). Additionally, she weighs around 55 kg. She has a body measurement of 38-26-38 inches. Furthermore, her hair color is blonde and her eye color is brown.