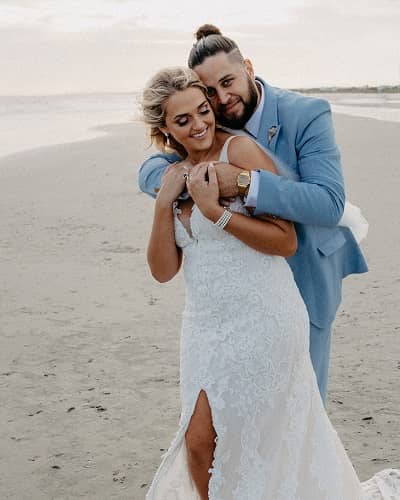 “The entire day incorporated small touches. The coordinates of where we [got] married are the same coordinates that are stamped on Tyler’s ring. We also hand-rolled cigars with our last name, Filmore, on them.”

Paige and Tyler were joined by their two dogs Wrangler and Nala. Tyler’s bus driver Rick Griffith married the couple using their own handwritten vows.

Their reception was held at Tyler’s parents’ home which happened to be nearby on the same beach. Likewise, they danced to Train’s Marry Me for their first dance as Husband and Wife.

When did Paige and Tyler get engaged?

Paige Korte and Tyler Filmore have been dating each other for more than three years. They got engaged in May 2020 during Memorial Day weekend.

“I’ve written so many songs about love and finding ‘the one’ that when it actually happened, I couldn’t believe it,”

He said that he was excited to share his whole life with Paige. They met at a Tin Roof restaurant in Columbia, South Carolina, and had a long-distance relationship for a year before Korte moved to Nashville. They live together with their dogs.

Paige Korte attended Coastal Carolina University in the year 2011. She graduated in the year 2015 with a Bachelor of Science Degree in Exercise and Sports Science.

After that, she joined the Midlands Technical College in the year 2017. She demonstrated knowledge of diagnostic Echocardiograms including cardiac anatomy and pathology, patient identification, evaluation of medical record documentation, infection control procedures, and image processing.

Paige worked as a fitness consultant at MUV Fitness Franchise from November 2015 to May 2017. She developed and maintained relationships with current members while she worked there. Likewise, Korte has worked as a pool server & banquet server in The Dunes Golf and Beach Club. She was promoted to pool manager.

Also, Korte has worked in Conway Medical Center as an intern and receptionist. Previously, she worked as a lifeguard for St. Clair Country Club.

Is Paige Korte on social media?

Tyler Filmore is an American singer-songwriter. He earned fame in 2018 with his breakthrough single, Slower. Read more bio…