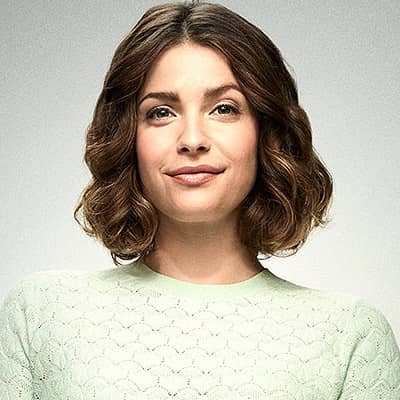 I just loved the lights and the stage. I never thought, 'I'm going to be an actor.' I always thought I was an actor, and all of the plays I did, everything I did, I was just doing what I was supposed to do

Nothing was handed to me. I think that's why I am where I am, because my parents had a strong work ethic and I was expected to work for anything I wanted.

Paige Spara at present is possibly single. She has not disclosed details of her current boyfriend or affair.

Who is Paige Spara?

Paige Spara is an American actress. She is known for working on projects titled films such as Home Again (2017) and The Good Doctor (2017).

She also hosts a podcast titled The Inbetween.

She was born on 08 Aug 1989 in Washington, Pennsylvania, US. The names of her father and her mother are Kevin Spara and Kim Spara respectively.

She also has a brother named Jesse and a sister named Taylor.

Regarding academics, in 2005 she passed out from Marymount Manhattan College. Then she took acting classes for two years at Point Park University.

Paige Spara is associated with the entertainment industry. In 2010, she made her debut with a short film named Prospect Street where she played the character of Camilla.

Then, in 2014, she was seen in What Showers Bring and After the Hurricane. She played the main character of Audrey Piatigorsky in the series Kevin from Work (2015) for 10 episodes.

Since 2017, Paige is portraying Lea Dilallo in an American medical drama TV show, The Good Doctor. Her other acting credits are,

She has a net worth of $500k (estimated) as of the year 2021. However, her salary and other earnings are unknown.

She did advertisements for Forevermark Jewelry, Sally Hansen nails, and Volkswagen Golf. Some of the top actress’s financial worth is,

This actress is keeping herself away from rumors. She is also not surrounded by any desperate scandals.

Regarding Paige Spara’s body features, her height is 5 ft 1 inch and her body weight is 49 kg. Moreover, her eyes are green and her hair is in the color brown.