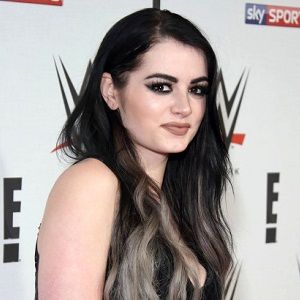 Paige is currently in a romantic relationship with Ronnie Radke. He is an American singer, songwriter, rapper, musician, and record producer. Recently, she broke with Kalan Blehm, who is the bassist of the metalcore band, Attila.

Similarly, she was once in a relationship with Kevin Skaff who is the lead guitarist of Metalcore band A Day To Remember. Likewise, she was previously engaged with a fellow professional wrestler Alberto del Rio. They started dating in May 2016 and later got engaged in October 2016.

Likewise, she proposed Del Rio in Puerto Rico. But, They later separated from each other. It was in mutual understanding as they were busy in their schedule as Paige was in Orlando and Del Rio in San Antonio. Furthermore, they were into several disputes even after separation as they were on the social media war.

The English professional wrestling personality Saraya-Jade Bevis is signed to WWE under the ring name Paige. She is an actress as well as a retired professional wrestler. Similarly, she won the Divas Championship, becoming the youngest champion in the title’s history at the age of 21.

She was born on 17th August 1992 in Norwich, Norfolk, England. Similarly, she is the daughter of professional wrestlers Patrick Bevis and Julia Hamer-Bevis. When she was a child she was scared of wrestling because of the injuries her family received and the concept that her parents fought other people for a living.

She has two brothers Zak and Roy. Similarly, her nationality is British but her ethnicity is unknown.

Talking about her education, she attended The Hewett School in Norwich, graduating in 2008.

She signed to WWE under the ring name Paige, as she is the manager of the tag team of Asuka and Kairi Sane on the SmackDown brand. Likewise, she is a two-time Divas Champion. She was also the inaugural NXT Women’s Champion in WWE’s developmental branch NXT, holding both championships concurrently at one time.

In the year 2005, she made her debut in the World Association of Wrestling. It was a promotion run by her family, under the ring name Britani Knight. Similarly, she went on to hold several championships on the independent circuit within Europe. In the year 2011, she signed a contract with WWE and wrestled within its developmental systems. Eventually, she debuted on WWE’s main roster in April 2014.

This talented woman has chosen to stop wrestle and on 9 April 2018, she officially retired from wrestling.

Similarly, she was Ranked No. 1 of the top 50 female wrestlers in the PWI Female 50 in the year 2014. She has won SCW Ladies Championship one time. In this way, she has won many awards and nominations.

Her salary on year wise is below:

She has been suspended twice for violating WWE’s wellness policy. Once it was for testing positive for an illegal substance according to WWE. In the year 2017, her sex tapes leaked. She was publicly humiliated and was into depression.

Paige has a height of 5 feet 8 inches and her weight is 55 kg. Similarly, she has brown hair and dark brown eyes color. Her body measurement is 34-24-36 inches. Likewise, her dress size is 4 and the shoe size is 7.5.