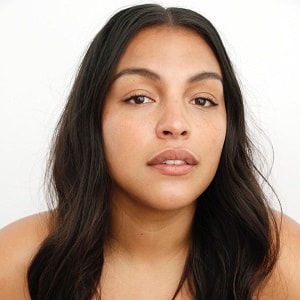 I'm happy to sparkle like a glazed disco ball.

Beauty means expression and being your most authentic self.

I think self-love isn't some destination you get to and you are then incapable of feeling those feelings, but a journey in which you adapt your experiences to make for a happier life.

There is no news heard about her relationship status as she likes to keep her profile very low. She is also currently busy on her career so she might not have got enough time to be involved in a relationship.

Who is Paloma Elsesser?

She was born on April 12, 1992, in Camden, London, England, UK. Her birth name is Paloma Kai Shockley Elsesser.

She was born to an African-American mother and a Chilean-Swiss father. She was raised in Los Angeles, California, and moved to New York City in 2010.

Paloma holds American citizenship but her ethnicity is mixed (African-American-Chilean-Swiss).

She attended The New School and studied psychology and literature.

Moving towards her career, Paloma Elsesser was discovered on Instagram by makeup artist Pat McGrath. Then, she Elsesser moved forward to become an ambassador for brands like Fenty Beauty by Rihanna and Glossier.  In addition, she stepped forward to walk Eckhaus Latta during the spring and fall 2018 shows.

After that, Paloma modeled for Nike, Proenza Schouler, Inc., Fenty Beauty, and Mercedes-Benz. Furthermore, she made her appearances in fashion magazines such as American Vogue, Elle, W, Wonderland Magazine, Vogue España, Teen Vogue, and Glamour.

She is linked with an agency named IMG Models.

She must have earned a huge sum of money from her modeling career however, she has not disclosed her exact net worth, salary, and income.

This model is so far not involved in any big controversies or rumors.

She puts a shoe of 10 US size, but her dress size and bra size is unknown.