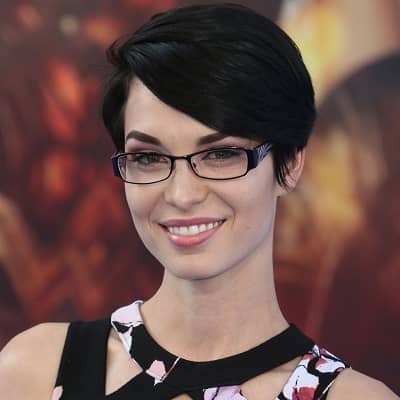 Pamela Horton was in relation to Ian Hecox on September 11, 2015. They met for the first time at Playboy’s SDCC SELF/LESS Party.

On April 8, 2016, Ian also declared her love of his life in his Instagram account. In 2019, during the opening episode of SmoshCast, Ian indirectly revealed that he and Pamela were no longer dating.

Later she officially confirmed that they had broken up. Though they are still good friends after separation.

Who is Pamela Horton?

Pamela Horton is an actress, commentator, Youtuber, model. She is also known as a gamer for being part of the Gamers Next Door.

Horton was born on May 4, 1988, in Whittier, California, United States. Her father’s name is Michael Horton. Likely, her mother’s name is Lisa Horton.

When she was nine years old her family moved from California to Wichita, a city in south Kansas.

She holds an American nationality and is of mixed (English, Irish) ethnicity.

Talking about her education, she has her schooling from Clearwater High School. She finished her degree from Wichita State University.

Pamela Horton’s interest in computer games started when she was just 5 years old. Her dad introduced her with The Legend of Zelda: A Connection to the Past.

Pamela started her modeling professionally in July of 2006. She is popular for appearing in Playboy Magazine 2014 for the month of October. Same year ‘Nintendo’, a video game company approached Pamela to help advertise the upcoming release of a video game, Bayonetta 2.

She later developed her career into game reviews and commentary as well as game development. In 2017, she joined a new gaming channel called Toaster Ghost.

First, she used to upload different gaming videos from the Playboy Mansion with her friend, Amelia Talon. Later, she made her own YouTube channel, ‘Pamela Horton’, and started to upload there. She likewise mutually runs another YouTube game channel, Gamer Next Door with Amelia Talon.

She has played in different online games like Chrono Trigger, Legend of Zelda: Majora’s Mask, EarthBound, and League of Legends. Now, she is one of the professional players at World of Warcraft. Moreover, Pam also makes content for Collider Video.

As of now, Pamela resides in Los Angeles and works as a gaming content creator.

There is no rumor and scandal about this model. Meanwhile, she has managed to keep herself out of rumor and controversy. She is doing great in her career.

Likely, her Facebook page also holds around 268K followers. Furthermore, She has her own YouTube channel with over 41.8K subscribers.

Also, get to know about other gamers like KarinaOMG, GamerGirl, and RonaldOMG.