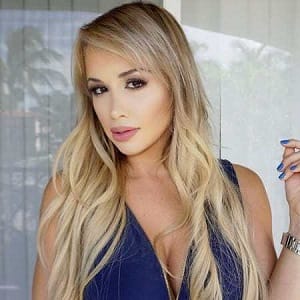 Paola Mayfield is a married woman. She is married to Russ Mayfield.

The pair met when Russ was on a work assignment in Colombia. They exchanged vows in October 2013.

Then in 2019, this couple is blessed with a child. They named him Axel Mayfield.

Who is Paola Mayfield?

Paola Mayfield is a Colombian model and television personality. People mostly recognize her for her appearance in ‘90 Day Fiancé’. Additionally, she also appeared in ‘Pax Masculina’ in 2017.

Mayfield was born in Colombian on May 14, 1987. Throughout her childhood years, she grew up in Bucaramanga, Santander.

She became interested in the world of modeling since her childhood years. She is of Colombian nationality. Furthermore, there is no detailed information available relating to her ethnic background and parents.

Paola Mayfield initially studied modeling at John Casablancas Modelling and Career Centre. She moved to Mexico City in 2010. Later she shifted to Barcelona. Additionally, she moved to the United States in September 2013.

Since then, she has appeared on several television shows. She joined the cast of ‘90 Day Fiancé’ which helped her garner fame around the country.

Furthermore, Mayfield also appeared in the movie ‘Pax Masculina’ in 2017. Currently, she is the model for CS Talent Entertainment and John Casablancas Modeling and Career Centre.

In addition, Mayfield is also associated with Linda Layman’s modeling agency. Previously in 2009, she also worked at Mimic Fashion Study. Additionally, she has a huge number of followers on Instagram and posts regularly.

Mayfield has not revealed her current salary. In addition, there are no details available regarding her estimated net worth at present.

Mayfield’s relationship with her husband Russ has been controversial from the beginning. People have criticized and accused Paola of sticking to her husband only because of his money.

At present, there are no rumors concerning Mayfield and her career.

Talking about her body measurement, Paola Mayfield has a height of 5 feet 6 inches. Additionally, she weighs around 57 kg. She has a measurement of 38-24-38 inches.