Paris Berelc is an American-born actress, model, and gymnast. . She is in a relationship with Jack Griffo. 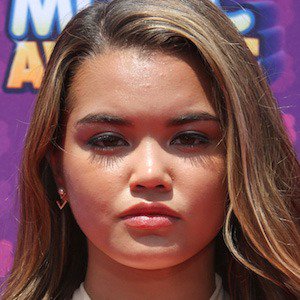 What is the relationship of Paris Berelc?

The duo is spending their quality time with each other and there is no sign of separation between them. But, they have not revealed their future plans.

Who is Paris Berelc?

Paris Berelc is an American-born actress, model, and gymnast. She is well known for her role as Skylar Storm in the Disney XD television series ‘Mighty Med’ from 2013 to 2015 and ‘Lab Rats: Elite Force’ in 2016.

She is also popular for her role as Alexa in the Netflix sitcom ‘Alexa & Katie’.

She was born on December 29, 1998, in the suburbs of Milwaukee, Wisconsin, USA. Paris is currently 23 years old. She is half Filipino.

She has got three siblings and is Bless Berlec (an aspiring actress), Joelie Berlec(Gymnast), and Skye Berelc. Paris is fond of dancing and began dancing at the age of 4. She also competed in gymnastics for 9 years.

She was discovered by the Ford Models at the age of 9.

Paris holds American citizenship and her ethnicity is a mix of French-Canadian and Filipino.

Talking about her education, she has not disclosed any information regarding her school and college.

Paris started her career in ads from Kohl’s, Boston Store, Sears, and K-Mart. She was on the cover of American Girl magazine for the November/December Issue in 2009. Then, she took acting classes at the age of 12 at the Acting Studio Chicago. She got a lot of support from her parents and she was taken to Los Angeles to try acting professionally.

Paris debuted her professional career at the age of 14 in 2013. She starred on the Disney XD sitcom ‘Mighty Med’ as Skylar Storm. Later in 2015, she made her appearance as Molly in the Disney Channel Original Movie, ‘Invisible Sister’ but the show ended in the same year.

Then, she continued to play the role of Skylar Storm on its spinoff series ‘Lab Rats: Elite Force’ which got premiered on March 2, 2016.

Currently, Paris has been portraying the lead role of Alexa in the film ‘Alexa & Katie’ since 2018. Also, she played the character, Phoebe, in ‘The Thundermans’ in 2018 and will be playing as Liz in ‘Tall Girl’ later.

She has an estimated net worth of around $3 million as of 2022, which she earned from her professional career.

There is a rumor that she is dating the famous actor Peyton Meyer who confessed his love for the pretty actress and even posted a video for him. But, after watching the video, it was found that they were doing a prank.