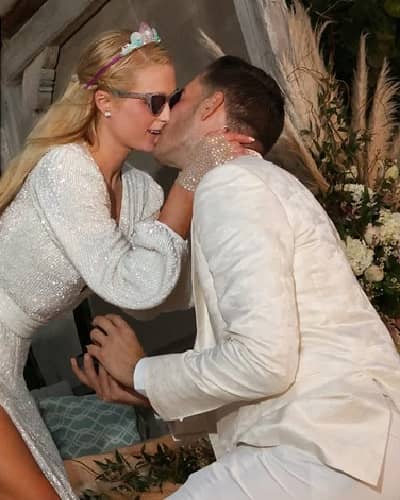 Paris Hilton is moving forward with her boyfriend Carter Reum. Carter proposed to her with an expensive ring on 13th February 2021 just on Paris’s birthday.

He proposed to her with a ring by Jean Dousset, the great-grandson of Louis Cartier. The ring features a 10 to 20-carat emerald-cut center stone framed by two shield-cut diamonds.

“Around the diamond, on the prongs, and at the base of the ring’s head are small pavé diamonds giving this ring extra bling while maintaining a classy look,”

They were celebrating Hilton’s birthday on a private island. She wore a Retrofete dress and a Loschy crown while Reum sported an all-white suit. During the celebration, Carter got down on one knee and asked her to marry. The engagement was held in front of family members Nicky Hilton and Courtney Reum. As per Metro, the ring costs around $2 million.

Paris Hilton’s first engagement was with model Jason Shaw. The engagement was held in 2002 just before she turned 21 years old. Jason proposed to her with a large pear-shaped diamond set on a gold plate. The price of the ring is not known. Their relationship did not last long and called it quit in 2003.

Also read Joel Kinnaman engagement with Kelly Gale! Know about the engagement ring, relationship, and net worth of Joel

Paris Hilton got engaged for the second time with Paris Latsis in May 2005. The made in love Latsis presented 15 different engagement rings for her to choose from. She chose a 24-carat ring which cost $5 million. But in September 2005, she called off the engagement. She said,

“I’m sad to announce that I’ve called off my engagement. Over the last couple months, I’ve realized that this is the right decision for me. We remain best of friends, and I’ll always love him. I hope people will respect my privacy during this emotional time.”

The third engagement of Paris Hilton was to her boyfriend Chris Zylka in the year 2018. Chris proposed to her on a mountaintop in Aspen with a 20-carat ring which cost him $2 million. The expensive ring featured a pear-cut center stone surrounded by a halo of diamonds and set on a double diamond pavé band.

Also read In Paris Hilton-Chris Zylka split, the bone of contention now is the engagement ring! Who purchased it?

Paris Whitney Hilton who is famous as Paris Hilton is an American businesswoman, socialite, television and media personality, model, actress, singer, as well as a DJ.

Her grandfather, Conrad Hilton is a founder of Hilton Hotels. Her personal life itself is controversial. However, she is known as the heiress and reality star who is regular in media attention for her socialite lifestyle and short-lived romances. Read more bio…

What did Gigi Hadid crave during her pregnancy? Check out her unseen pictures!
Tags : Businesswoman Model