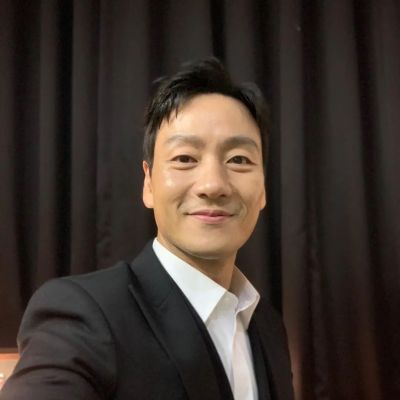 Park Hae Soo is a married man. He is married to his long-time girlfriend whose identity is unknown at the moment. The duo tied the wedding knot on the 14th of January 2019 and their marriage ceremony was held in Seoul.

Recently, he and his wife welcome his first child on September 29, 2021.

Who is Park Hae Soo?

Park Hae Soo is an actor, entrepreneur, and theater artist from South Korea. Recently, he emerges the fame for his role as Cho Sng-woo in the Netflix series, Squid Game which was released worldwide on September 17, 2021.

Park is a very secretive person when it comes to his personal life. So, he hasn’t yet disclosed the information regarding his parents, siblings, and early life. Talking about his academics background, he went to Dankook University.

Further, he holds Korean nationality and his ethnicity is Asian. He follows Christianity religions.

Park started his acting career as a theater artist in the production The Strongest Comedy Mr. Lobby in 2007. After that, he has appeared in numerous theatre shows such as Hero, 39 Stairs, Full for Love, Samcheon, Man from Us, Judo Boy, and more. Park made his television debut in the year 2012 through the MBC television series, God of War as Kim Yun-hu.

He then appeared on SBS television series such as Six Flying Dragons (2015-2016), Legend of the Blue Sea (2016), Racket Boys (2021). He made a cameo appearance in the series, The Liar and His Lover as Bass player. In 2014, he got a big-screen role in an adventure film, The Pirates where he portrayed the role of Hwang Jong-Geun. His other film credit is Minority Opinion, Master, and Time to Hunt.

Park is currently in the spotlight of the media as he starred in the role of Cho Sang-Woo, which held player number 218 in the survival drama series Squid Game. The series starred popular personalities like Lee Jung-jae, Park Hae-soo, Wi Ha-joon, Heo Sung-tae, and more.

Moreover, he has been nominated for several awards show such as APAN Star Awards, Baeksand Arts Awards, Buil Film Awards, and more.

Park is set to star in upcoming big-screen movies Yacha (as Ji-hoo) and Ghost (Kaito). Similarly, he is playing the role of Berlin in an upcoming South Korean television series Money Heist, an adaptation of the Spanish heist crime drama series Money Heist.

Park might have accumulated a decent amount of fortune throughout his profession as an actor and entrepreneur. As of now, he hasn’t disclosed his exact net worth, salary, and other earnings in the media.

Talking about the income of other cast members of the Squid game, Lee Jung Jae who portrayed the role of Seong Gi Hun aka player 456 is speculated to received $344 thousand per episode.

He is the highest-paid Korean actor in the series and has an estimated net worth of $2 million.

Further, he has black pair of eyes and as well black hair color.