Rose to fame for his recurring roles as Young Kevin in the hit drama series This Is Us.

Parker Bates is too young to be in a romantic relationship. Currently, he is single. He is more focused on his studies and enjoying his career. 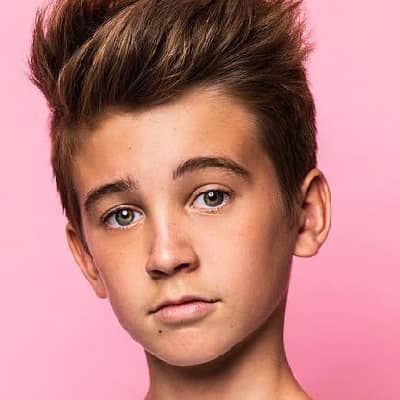 Who is Parker Bates?

Parker Bates is a child actor and model. He rose to fame for his recurring roles as Young Kevin in the hit drama series This Is Us. Also, he has amassed a huge fan base on social media sites.

Parker was born in Dallas, Texas on March 1, 2007. At present, he is 14 years old and his zodiac sign is Pisces. He holds an American nationality belonging to Caucasian ethnicity. He follows the Christianity religion.

The actor hasn’t yet disclosed his parent’s identity in the media. He has an older brother named Prestyn Bates who is also an actor. Bates is attending Adams Central High School.

From the age of two, Parker started his modeling career. He got his first commercial when he had been accompanying his older brother Prestyn to an audition. After then, he started his career and made appearances in commercials, PSAs, and short films that were being shot throughout the region of Dallas and Austin.

Later, he moved to Los Angeles and began auditioning regularly. During the time, he got a series on NBC’s hit show “This Is Us” in a regular role. He got his first lead role as Tim Hart in the feature film Magic Max opposite Ivan Sergei and Barry Corbin. Moreover, he starred in TV Land’s Teachers where he portrayed the role of Jonah. He has also contributed his voice to Disney’s Tangled: The Series.

Bates is head of the Junior Chef Council at Great Wolf Lodge where he has his menu items  Also, he has published recipes in OK Magazine!. Furthermore, he is an ambassador for Paw Works Rescue Group in Thousand Oaks California.

In 2020, Parker has been nominated for CIFF Award in the category of Best Supporting Actor in Magic Max (2020). Likely, he won five different awards including the Gold Award, Award of Excellence, and Best Ensemble Cast.

Parker is enjoying his acting career up to date he hasn’t been part of any sorts of rumors and controversy.

Parker has earned an impressive amount of wealth throughout his acting career. However, he hasn’t yet revealed his actual net worth to the media. Bates received around $8,210 per episode in season 1 of NBC’s hit series This Is Us.

When he bumped up to season two, his paychecks increased and earned $12,500 per episode.

Parker stands at a height of 5 feet 3 inches tall and his weight is about 56 kg. He has alluring blue pair of eyes with light brown hair color.

Faithe Herman
Tags : "This Is Us" American child actor Model