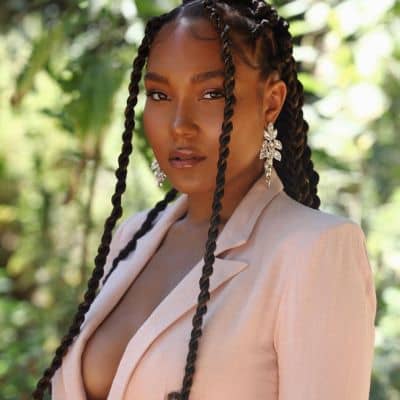 The actress, Parker McKenna Posey is presently single and she is not dating anyone at the moment.

Previously, she was dating and was in a relationship with a musician and YouTuber, Chris Sails. The past couple started dating in 2018. They uploaded several moments of their relationship on many social media. Even, Sails and Posey featured in each other’s YouTube channels.

But, their relationship was not healthy as Chris physically tortured her when they were drunk. Posey even complained to the authorities that he punched and slapped her multiple times. Additionally, Sails strangled her, slammed down her head on the ground which led her to a black eye and bruises.

Posey shared the picture of her injured face on her Instagram handles. Later, the YouTuber was charged with third-degree felony assault.

Before, she was dating rapper, Problem in 2015. Nevertheless, it was not official as both of them never mentioned in the public. Further, she was dating Mandela Van Peebles in 2013. The couple separated in 2015.

Who is Parker McKenna Posey?

Parker McKenna Posey is a well-recognized American actress, curator, designer, philanthropist, and TV actress. Posey is best famed for her role in the American superhero movie Superman Returns and ABC’s television show My Wife and Kids.

Parker McKenna Posey was born on 18 August 1995. At present, her age is 25 years old. Likewise, her birthplace is Los Angeles, California, the USA. She was born at Cedar Sinai Hospital.

Parker is the daughter of her father, Polo Posey whereas her mother is Heather Stone. Moreover, she has two siblings as well, Carl Posey, and Jewel Posey. Also, she has three half-siblings, Khari, Dilynne, and Jake Posey.

Talking about her nationality, Posey holds an American identity whereas her ethnicity is mixed ( African American, Italian, and Irish).

Parker introduced herself to the acting industry when she was just two years old. She emerged in a commercial advertisement for Kodak. Later, she became the model for Disney catalogs. Moreover, she also portrayed a younger Macy Gray in her music video “Sweet Sweet Baby”. Posey starred in the hit ABC sitcom “My Wife and Kids” at the very young age of four. There, she performed the role of Kady Kyle.

The actress had gained huge popularity in her childhood. She was nominated for Young Artist Award in 2002 in the category, “Best Performance in a TV series – Young Actress Age Ten or Under”. Likewise, Mckenna emerged as a guest performing the role of LaTanya Tillman on the crime drama series, NYPD Blue in 2001. She also performed on a feminist medical drama series, Strong Medicine in 2004.

However, the series, ‘My Wife and Kids’ canceled after five seasons. Additionally, Posey has performed in many TV films like Meet the Santas, Summer Camp, iCarly, and Alice Upside Down. The prominent actress took a long break of six years from her acting career.

Parker made a comeback in 2015 performing in a short documentary, Lucky Girl. Freshly, she has appeared in movies such as 90 Minutes of the Fever (2016), This is Real, Streets of Money and Snowfall, and so on in 2017.

Talented actress, Mckenna has earned large wealth from her dedication to the acting industry ever since her childhood. She has earned from various commercials advertisements as well.

It is reported that Parker McKenna Posey has an estimated net worth of $1.5 million. Similarly, she returned to acting as a bonafide actress appearing in movies, television shows, commercials, and stage productions.

Moreover, Posey earns an average of $51 per hour. Also, she lives a lavish lifestyle and owns some luxurious cars such as Rubicon Jeep, Range Rover, and Mclaren.

When Parker was in a relationship with actor, Mandela Van Peebles in 2013 and there comes to a controversy in the media. It was regarding a blog post by a prominent blogger Sandra Rose, where she mentioned Posey as a bisexual. However, Posey’s mother wrote a letter to the blogger mentioning the post was to create a bad image of Parker.

Additionally, she was rumored to be dating rapper Problem. The couple was exposed in a picture spending quality time in Honolulu, Dating.

25 years old star, Parker Mckenna Posey has gorgeous looks, hot figures, and a charming personality as well. She stands at a height of  5 feet 7 inches. Also, she has a balanced body weight of 57 kg.

Furthermore, Posey has dark brown eyes as well as her hair is dark brown. Parker’s bra size is 32 C and the dress size is 4 (US).

Regarding her social media presence, Parker McKenna Posey is an active personality on social media. Parker has more than 1.5 million followers on her official Instagram account @parkermckennaaa.

She is also active on Twitter with around 63,4k followers.

Moreover, Mckenna is also available on Facebook with nearly 61.5k fans and supporters.