American Parker Pannell is a social media influencer and actor.

To date, he has not introduced anybody as his girlfriend or lover. 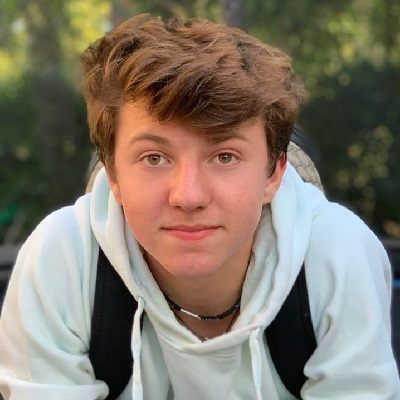 Who is Parker Pannell?

Parker Pannell is a social media influencer and actor. He is renowned for his lip-syncs, comic dubs videos  TikTok videos that went viral on the web.

Last, in 2020, he appeared in the short, Sumer Skewl as Enrique Yeeselston. As of now, his upcoming movie, King Knight is at a stage of post-production.

Parker Pannell was born on the 19th of September 2003 in Lexington, Kentucky. Later, he moved to Los Angeles, California along with his parents. He is of British ethnicity.

To date, he has not shared any details on his family background including her mother, father, and siblings. However, he has shared the pictures of his mother via Instagram.

Details on his academics are not available. Probably he is attending High School.

Parker Pannell started his social media career as a YouTuber with his YouTube channel. He created his channel on the 26th of February 2013. However, he uploaded his first YouTube video, Card Ticks and College Girl in October 2016.

The channel is based on his 24-hour challenges, sketches, and DIY projects. Within no time, such videos gripped the attention of the large mass of audiences making him a YouTube star.

However, he intended not to be limited to just YouTube. Eventually, he landed in TikTok. Initially, the videos were just for his fun.

However, such video comic dubs and lip syncs, comic dubs, and dancing videos went viral. Currently, his TikTok has around 2.2 million followers with more than 62.6 million likes.

Besides being a social media influencer, he is expanding his career as in acting.

In 2017, he made his movie debut with the film, Ok. In the 50-minute family drama, he portrayed the character of Devin Campbell. After that, he appeared in short movies like ApocaFISH and Sumer Skewl.

Apart from that, he also earns via his TikTok videos and Instagram brand promotion.

Parker Pannell has brown eyes with brunette hair. He stands at a height of 5 feet 8 inches and has a decent weight.

Talking about his appearance, he has a charming persona with an oval-shaped facial structure. Also, he prefers to be clean-shaved.

To date, he has not been part of any sort of controversy and scandals that created a buzz in the media.

Besides that, he also managed to maintain distance from any sort of rumors too.

He also has a self-titled YouTube channel with over 124k subscribers and more than 984.1k views.

You may also read the bio of Cynthia Parker, Willywonkatiktok, and Indi Star.