Dancer Pasha Kovalev is married and a father of one. 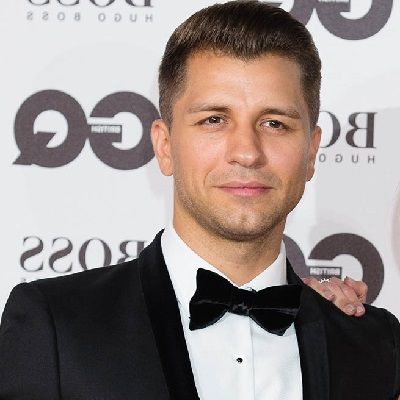 Pasha Kovalev is married to Rachel Riley. They exchanged vows on 28 June 2019. They started dating in 2016.

Similarly, in May 2019, they announced on social media that they are expecting their first child. Then in Dec 2019, this couple welcomed their daughter, Maven Aria.

Before this, Pasha dated Anya Garnis in his teenage years. They met in a dance class in Siberia. In the year 2001, they moved to the US together. But later broke up.

Who is Pasha Kovalev?

The Russian professional Latin and ballroom dancer are Pasha Kovalev is known for making the Semi-Finals of season 3 of the US reality show So You Think You Can Dance.

Similarly, he joined BBC’s Strictly Come Dancing as the new professional dancer of its ninth series.

He was born on 19th January 1980 in Komsomolsk-on-Amur, Siberia, Soviet Union. As of September  2021, he is 41 years old. He is the son of Sergei Kovalev and Galina Kovaleva.

Similarly, he was raised by his mother and he grew up with his brother.

Likewise, his nationality is Russian and his ethnicity is Latin.

Pasha Kovalev started dancing at the age of eight. In the year 2001, he moved to the United States with his professional dance partner Anya Garnis. In the year 2007, the couple competed on the third season of the American version of So You Think You Can Dance.

After that, they have participated in the eight subsequent seasons as either choreographers or All-Star partners to the contestants.

Similarly, in the year 2011, Pasha moved to the United Kingdom to take part in the BBC‘s Strictly Come Dancing as a professional dancer.

He finished runner-up on both the ninth and tenth series with celebrity partners Chelsee Healey and Kimberley Walsh. After that, he went on to win series twelve with his partner Caroline Flack.

Moreover, despite facing backlash over her past dance experience and landing in the bottom two three times, he and his celebrity partner, Ashley Roberts, later became runners-up on the sixteenth series of the show.

Similarly, they currently hold the record of the highest average for any celebrity on the show – with an average of 36.9 – and another record for scoring the most perfect scores – with a total of five.

Furthermore, he announced that 2018 was his final series on the show as he had decided to “find a new challenge” after “eight incredible years”.

The estimated net worth of Pasha is under review. He might earn a huge amount of money from his career. But, he has not disclosed his income and salary.

Talking about Pasha Kovalev’s body measurements, he has a height of 5 feet 11 inches but his weight is unknown. Furthermore, his hair and eyes color is brown.

Who is the girlfriend of Pasha Kovalev? Facts about his girlfriend Rachel Riley!