Pat Bergeson is currently married to Annie Sellick. His wife is a musical artist and is associated with the Chalice Music Inc label.

However, the details of their wedding are not revealed.

Before her, Pat exchanged a vow with another musician, Alison Krauss. They wedded in 1997 but divorced in 2001.

But together they were blessed with a child, Their son Sam was born in July 1999. 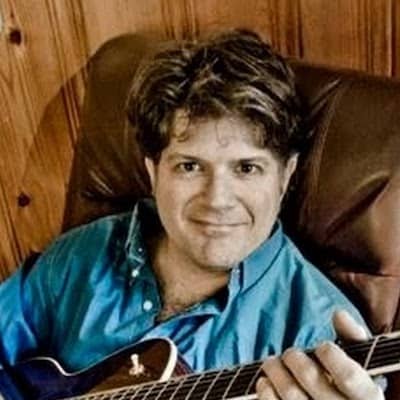 Who is Pat Bergeson?

Pat Bergeson is an American guitarist who is with a musical group named Les Brers. He is also a harmonica player and songwriter.

Pat is known for his jazz, blues, rock, and country music styles. He also teamed up with artists like Chet Atkins, Lyle Lovett, and Suzy Bogguss.

He was born on 11 March 1961 in Batavia, Illinois, United States. The name of his father and his mother is not yet disclosed.

Pat’s ancestry is Caucasian and talking about his academics, he enrolled at the University of Illinois to study music.

Pat Bergeson is an amazing and experienced musician and songwriter. He wrote and played several songs. Since his childhood, he was interested in music and used to play drums.

But later he shifted his interest toward guitar and harmonica. He has written and played guitar for projects such as One More Again, Good Things Come To Those Who Wait, Hippy Dance, Love Calling, Let’s Make a Christmas Memory, and more.

Moreover, he is also a part of the musical band Les Brers. He joined them in 2015 and the other members are Oteil Burbridge, Jack Pearson, Marc Quinones, Bruce Katz, and Lamar Williams jr.

At present, his estimated net worth is around $5ook US. Also, his salary from his musical career is not yet revealed.

This musician is keeping himself away from rumors and scandals at present.

Regarding Pat Bergeson’s body features, his height and his body weight are of normal shape.