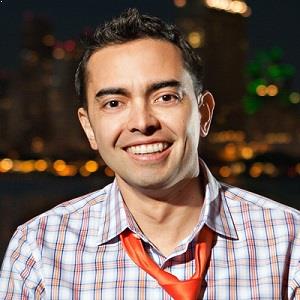 In other words, a sure-fire way to predict the future is to take no action at all. When you do nothing, you get nothing.

I’m writing a first draft and reminding myself that I’m simply shoveling sand into a box so that later I can build castles.

What is the relationship of Pat Flynn?

Pat Flynn is a married man. He and his wife April Flynn have two children together, Keoni, and Kailani. There is no further information regarding the marriage.

At present, the marriage seems stable and is going strong as no news regarding any extramarital affairs is known.

Who is Pat Flynn?

Pat Flynn is an American entrepreneur, blogger, and podcaster. People mostly know him for his website Smart Passive Income, where he conducts income experiments and shares the results.

Flynn was born in the United States on December 6, 1982. Most of the information relating to his early life and childhood is not available at present. He is of American nationality. Furthermore, he has not revealed his ethnic background as of now.

Talking about his education, Flynn graduated from the University of California, Berkeley. He holds a B.A. degree in Architecture.

Flynn initially found work as a Job Captain in an architectural firm but was laid off in 2008 during an economic downturn. Later, he released his first information product online at GreenExpertAcademy.com.

The book became a grand success and it made sales of over US$8000 in the first month. Next, he decided to create a resource to share what he learned during the process and try to help others replicate his success. Eventually, the Smart Passive Income blog was born and made over US$200,000 in the first year.

Flynn also spoke at the Financial Blogger’s Conference in Chicago. Additionally, he had a one-hour presentation at Blog World Expo LA 2011 on 4th November.  His presentation was titled: ‘How to Be Everywhere: Building a Profitable Brand by Thinking Outside the Blog’.

At present, Flynn s on the board of the non-profit Pencils of Promise and is an advisor to tech startups LeadPages and ConvertKit. To date, Flynn’s businesses have generated over $3 million in revenue. He is also the author of  ‘Will It Fly?’, and ‘Let Go: How to Transform Moments of Panic Into a Life of Profits and Purpose: Expanded Edition.

Flynn has not revealed his current salary. However, he has an estimated net worth of around $3 million as of 2022.

Although most of his career is built on the Internet, Flynn has successfully kept his life away from the mainstream media spotlight. To date, he has not been part of any notable controversies. Additionally, currently, there are no rumors concerning Flynn’s life and career.

There are no details regarding Flynn’s height and weight at present. His hair color is black and eye color is dark brown.

Which Path To Go? Reign Edwards Dating Her Co-Star? Is She Choosing Her Career Over BoyFriend? Let’s Take A Look In Her Love Life