Pat Sajak is famous as the host of the game show, Wheel of Fortune for four decades. He could not host three episodes because of a medical emergency. Pat is married and has two children. 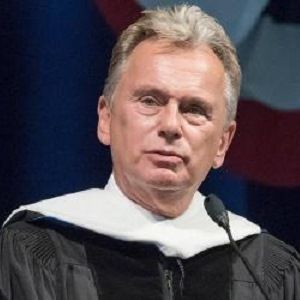 I honestly didn't think the show was going to last much longer when I started in 1981. I thought a year would be lucky, 13 weeks more likely before it was back to forecasting the weather

It's a stressful place to live. It's nice to leave L.A. for a few months and live somewhere more down to earth and easy going. It's also close to my wife's side of the family, and that's important to her.

In the real world, the fact that people can act or sing or host or tell jokes or appear on a “reality” show doesn’t make their opinions any more valid or worthy of notice than someone who works in an office or drives a truck or bags groceries or fights fires.

Pat Sajak is married to photographer Lesly Brown. Their wedding ceremony was on December 31, 1989, after dating since 1988.

Previously, he was wed to Sherrill Sajak. He met Sherrill Sajak in 1978 and got married in 1979. They had a short-lived marriage as they filed for divorce in 1986 after 7 years together.

Who is Pat Sajak?

His father, Leonard worked in a factory but he expired when Pat was very young. There isn’t any information regarding his siblings. After his father’s death, his mother remarried, Walter Backal. His grandparents were of Polish descent.

He belongs to American nationality and Polish ethnicity. His birth sign is Scorpio.

Talking about his education, firstly, he attended Farragut Career Academy. Then, he attended Columbia College Chicago.

On talking about his profession, in the early 70s, he worked as a DJ and when his popularity started increasing, he was also offered a voiceover job at NBC’s ‘Today’s Show,’ which quickly turned into anchoring.

‘KNBC-TV’ was looking for a weatherman in the late 70s and when they came across him. They offered him the job and he gladly accepted it.

Later, he also continued with the prime time but left the daytime version. The audience loved him for his earthy demeanor and quick wit. During the 1982 comedy film ‘Airplane II: The Sequel,’ he appeared as a newscaster.

In fact, Pat Sajak has also served as a guest writer for Ricochet.com, which deals with social-political issues.

Moreover, he has also served the ‘Claremont Institute’ on their board of directors. During 2005, he became one of the investors in the ‘Golden Baseball League.’

On talking about his lifetime achievements and awards, he has won Daytime Emmy Awards for Outstanding Game Show Host for Wheel of Fortune (1983). Likewise, he won the People’s Choice Award for Favorite Game Show Host.

In 2019, Pat Sajak had to undergo emergency surgery due to a blocked intestine. The operation went successfully.

On talking about Pat Sajak’s body measurements, he has a height of  5 feet 10 inches. Additionally, he weighs 80 Kg. Pat’s hair color is light brown and his eye color is blue.

Also, read the affair, salary, the net worth, controversy, and the bio of  Anna Renee Duggar, Jessica Hayes, Aubrey O’Day.

What disease does Pat Sajak have?

What is Pat Sajak's annual salary?