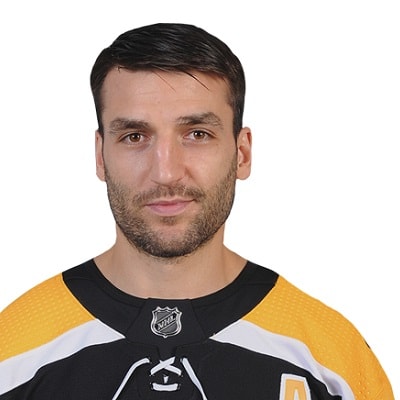 Patrice Bergeron is married to his longtime girlfriend Stephanie Bertrand since July 20, 2013. The pair began dating in 2006. The couple is blessed with three children: Zack Bergeron was born on October 21, 2015, daughter Victoria Bergeron was born in 2017 and a younger son on 2 December 2018.

The couple is currently living together without rumors of extra-marital affairs and divorce.

Who is Patrice Bergeron?

Patrice Bergeron is a Canadian ice hockey player. He is currently playing as an alternate captain and ice hockey center for the Boston Bruins of the National Hockey League.

He was born on June 24, 1985, in L’Ancienne-Lorette, Quebec, Canada. Patrice is currently 33 years old and his birth sign is Cancer. He was born to father Gerard Cleary and mother Sylvie Bergeron. He has a brother named Guillaume Bergeron.

Patrice holds Canadian citizenship but his ethnicity is unknown.

Talking about Patrice’s education history, he has not disclosed college and university names that he attended.

He began his career playing at Quebec International Pee-Wee Hockey Tournaments in 1998. Later, he was drafted in the fifth round of the 2001 QMJHL Draft in 2001 and played hickey for Séminaire St-François Blizzard.

He won his second gold medal at the2014 Winter Olympics and was a member of Canada’s championship team at the 2016 World Cup of Hockey.

He has an estimated net worth of around $5 million and he has earned that sum of money from his professional career. In 2016, his salary is recorded at around 8.75 million USD. At present, as sources have estimated, his salary is around $7.5 million per year.

Patrice has been successful in keeping himself far from rumors and controversies in his personal and professional life.

Patrice Bergeron has a tall height of 6 ft. 1 inch and weighs 88 kg. Patrice has dark brown eyes and black hair.