Actor Patricia Azarcoya Schneider is married and a mother of two.

Famed artist, Patricia Azarcoya Schneider is in a married relationship with Rob Schneider. Rob is a well-named American actor, comedian, screenwriter, and director. He has emerged in movies such as Grown-Ups, The Benchwarmers, Deuce Bigalow: Male Gigolo.

The couple dated for six years before exchanging the vows on 23 April 2011. Their wedding took place in Beverly Hills, California.

Schneider is the third wife of Rob. Before that, he was married to London King and Helena Schneider. Their wedding celebration was secret with a few of their close relatives and dearest friends.

The couple has two children. They welcomed the first daughter named Miranda Scarlet Schneider(16 November 2012). Later, their family extended after Madeline Robbie Schneider(14 September 2016) was born. Similarly, Patricia is the stepmother of Elle King as well. 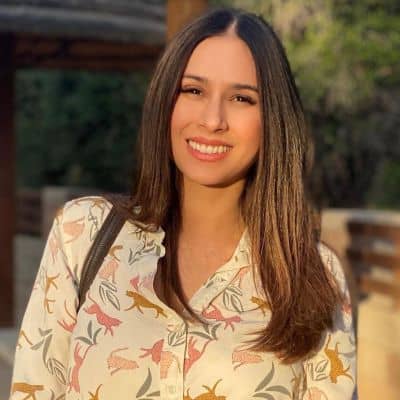 Who is Patricia Azarcoya Schneider?

Also, she is famous for being the better half of the well-renowned American actor and comedian, Rob Schneider.

Patricia Azarcoya Schneider was born on 6 March 1988. At present, her age is 33 years old. Likewise, her birthplace is Mexico City, Mexico.

Not much is known about his father and mother’s details, Patricia has been secretive about his family details. Moreover, her sibling’s details are also not available to the public till now.

Talking about her nationality, Schneider holds a Mexican identity whereas her ethnicity is Latina.

Regarding education, Azarcoya has earned her graduation degree from Mexico University.

Professionally, Patricia Azarcoya Schneider began her modeling career in Mexico, and later on, she climbed up the success to become a TV and film actress. After her debut in the acting industry, Patricia began working as a producer and worked on several Mexican films and TV series. For her better career, Azarcoya preferred to move to the USA.

The actress shifted to the USA in her mid-2000s. She came into the limelight after emerging in the Netflix series ‘Real Rob opposite Rob and her daughter Miranda. Azarcoya also worked as a co-writer and a co-producer of the show.

Besides, she has served as a casting director and impressed the audience and many others in the film industry. The season came to an end with average success. Post the show, the fan demanded a second season.

The second season of the series was released in September 2017. However, the second season did not earn much popularity. Besides, she has served as a producer for television series such as Cuentamelove (2008), Que Show con Alejandra Bogue’s(2008), and Guerra De Chistes(2008).

Furthermore, the actress has also played in some motion pictures and arrangements such as Hank and Rita, Noches con Platanito, and so on.

It is reported that Patricia Azarcoya Schneider has an estimated net worth of $3 million. Her annual salary is believed to be $51,259.

On the other side, her spouse, Rob Schneider has an approximated net worth of $ 15 million. He has emerged in some box office movies and earned handsome money from those movies. The couple had a previous history of owning a $1.922 million house in Marino, California. Finally, they sold the mansion for $2.3 million in the year 2009.

As an actress and TV series producer, Azarcoya has never been part of any controversial matter or rumors till now.

It seems that the named personality prefers enjoying her personal life and does not want to merge it with her professional life.

33 years old actress, Patricia Azarcoya has gorgeous looks as well as a charming personality. Further, she has hot figures and a good body shape. She stands at a height of 5 feet 6 inches. Also, she has a balanced body weight of 60 kg.

Furthermore, Schneider has brown eyes whereas her hair is dark brown.

About her social media presence, Patricia Azarcoya Schneider is an active personality on social media. Patricia has more than 83k followers on her official Instagram account @iampatriciamaya.

Moreover, Schneider is also available on Facebook with nearly 2.9k fans and supporters. The famed personality is not active on Twitter as of now.