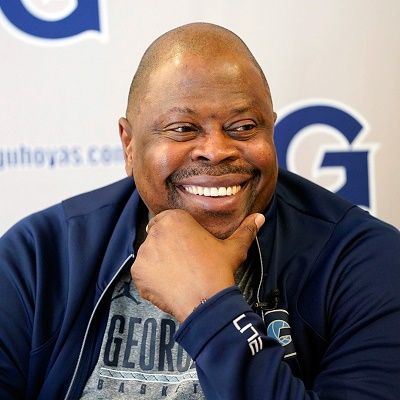 Whenever my body heals and the pain and all the swelling goes away is when I'll be ready.

Patrick Ewing is possibly in a relationship with volleyball player Cheryl Weaver. This couple together has a daughter Alexis.

Previously, he was married to Rita Williams. They got married in 1990 and got divorced in 1998. They together have a son Patrick Ewing Jr. who is a basketball player and daughters; Corey (student), and Randi, who is a highly recruited, volleyball player.

Who is Patrick Ewing?

Patrick Ewing is a Jamaican-American basketball player, an actor, an author, and coach of the Georgetown University men’s basketball team. He is best known as the player an eleven-time all-star and named to seven All-NBA teams.

This player was born on August 5, 1962, in Kingston, Jamaica with the birth name Patrick Aloysius Ewing. His father’s name is Carl, a mechanic and his mother’s name is Dorothy, a homemaker.

He has five sisters (Barbara, Rosemarie, Lastina, Karlene, and Pauline) and a brother Carl Jr.

In 1971, his mother moved to Cambridge, the United States and worked as a kitchen worker in a hospital and bought her family one by one. After moving to America, he saw a first-time basketball game and was fascinated by the game only weeks into his new life in the US. He is of All-American descent.

This sportsman attended Cambridge Rindge and Latin School where he learned to play basketball with the help of John Fountain. He joined the MIT-Wellesley Upward Bound Program in order to prepare for college.

Later, Ewing attended Georgetown University. He became one of the first college players to start and star on the varsity team as a freshman. Georgetown was ranked #1 in the nation for the majority of the NCAA championship for the 1984-1985 season.

Patrick Ewing’s four-year college career was one of the most successful college runs of all time. Patrick helped Georgetown reach the final game of the NCAA Tournament three out of four years. He left a cultural impact on a sport. He was one of the first freshmen to lead a major college basketball team.

This player was expected to be a top pick at the NBA draft took place on June 18, 1985, where his team would be making history by doing so. The same year New York Knicks signed him to a 10 year. He was voted NBA Rookie of the Year and named NBA All-Rookie First team in the first year in the league. At the 1992 Olympic games, Patrick was a member of the original Dream Team.

Afterward, this basketball player was named NBA All-Star and one of the 50 greatest players in NBA history. New York Knicks defended Micheal Jordan and Chicago Bulls in the 1992 Eastern Conference Semifinals.

In the game between Knicks and Charlotte Hornets held on 14 April 1993, he suffered a moment of embarrassment when Muggsy Bogues who was shorter than him, managed to block his shot. Ewing was the main contributor to the Knicks’ run to the 1994 NBA finals for the first time since 1973.

In the  Eastern Conference Semifinals, Knicks faced Miami Heat in the 1997 playoff where Patrick was involved in a Game 5 brawl. They lost the three games and were eliminated. On December 20, 1997. The next season, he fell awkwardly and landed with all of his weight on his shooting hand while attempting a dunk. His wrist was damaged suffering a displaced fracture, a complete dislocation of the lunate bone, and torn ligaments.

He missed the remaining 56 games of the season where Patrick had only missed 20 games in the previous ten seasons. The next year, Ewing returned for Game 2 of the Eastern Conference Semifinals against the Pacers. However, the Knicks fell to the Pacers in five games.

In the 1999-2000 final season with Knicks, the team finished as the third in the East behind the Pacers and Heat. This basketball player played in his 1,000 NBA game. He finished his Knick career with a franchise-record 1,039 games played in a uniform during his final seasons.

After he left the team in 2000, he became a part of the Seattle Supersonics. On September 18, 2002, he announced his retirement after a year with Supersonics and Orlando Magic. Later, he became a coach with the Washington Wizards.

His jersey number 33 was retired by the team in a large ceremony on February 28, 2003. He became an assistant coach for Orlando Magic in 2007. Later, on May 14, 2019, Ewing represented the Knicks during the NBA draft lottery for the first time.

Patrick has made a short appearance in the movie Senseless. He has also appeared in the movie Space Jam along with Muggsy Bogues, Shawn Bradley, Larry Johnson, and Charles Barkley.

Ewing has made a cameo appearance in the sitcoms Mad About You, Webster, Herman’s Head and Spin City. He starred in the movie The Exorcist III as Angel Of Death. He co-wrote a painting how-to book for children In the Paint.

He owns a luxurious mansion in New Jersey, the US.

Ewing testified in part of the Atlanta’s Gold Club prostitution and fraud federal trial in 2001. He admitted that he went to the club and received oral sex twice. But he was never charged with a crime.