Patrick John Flueger is an American actor who is popular for his role on the show, Chicago P.D. Patrick's girlfriend is an actress, Marina Squerciati. 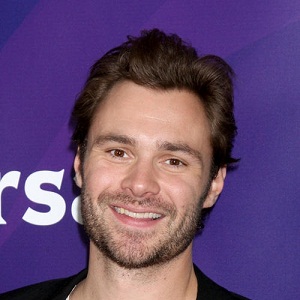 Patrick John Flueger was in a relationship with actress Marina Squerciati who was also his co-star. They were seen getting cozy in public places. There were rumors that they might be planning to get married. However, it later turned out to be false.

Marina delivered a baby girl in May 2017 but did not reveal the baby daddy. Hence people speculated that Patrick was the child’s father whereas others have mentioned an attorney named Eli Kay-Oliphant to be her husband. But there have been no official announcements from any of them.

Patrick dated Carly Pope for three years from 2005. Later he was in a relationship with Briana Evigan from 2010 to 2013 but both these relationships did not last.

Who is Patrick John Flueger?

Patrick John Flueger is an American actor. He is known for a lead role as Shawn Farrell in the television series The 4400. He currently appears as a regular in Chicago P.D., playing the role of Adam Ruzek.

Flueger was born on December 10, 1983, in Red Wing, Minnesota, the United States of America. His nationality is American and his ethnicity is mixed(English, German, Swedish, Norwegian, Irish).

His mother’s name is Kimberly “Kim” (Dale Johnson) Flueger and his father’s name is Kevin Charles “KC” Flueger. He is the eldest of the three siblings.

Patrick John Flueger’s first significant role was in the Disney film The Princess Diaries in 2001. The same year, he appeared in A New Princess, as well. The next year, he appeared in Septuplets and Myra: Miracles Happen, followed by Judging Amy, The Pitts, CSI: Miami, Boston Public, Twelve Mile Road, Grounded for Life, and JAG in 2003.

In 2004, he appeared in Paradise, It’s All Relative, and Law & Order: Special Victims Unit. He then landed the role of Shawn Farrell in the USA Network series The 4400 from 2004 to 2007. While still working on The 4400, Flueger got the role of Rusty in the film The World’s Fastest Indian, starring Anthony Hopkins.

It is interesting to note in The World’s Fastest Indian, he starred alongside Antony Starr. Flueger would later get cast as the American version of the character Starr played in Outrageous Fortune, re-titled in the U.S. version as Scoundrels. It aired on ABC during the summer of 2010.

In 2007, Flueger starred in Spin, followed by Kill Theory, The Job, and Brothers in 2009. Apart from Scoundrels, he appeared in VideoDome Rent-O-Rama and  Mother’s Day in 2010. In February 2010, Flueger was among those screen-tested for the role of Captain America in the 2011 feature film. Flueger next appeared in Footloose in 2011, and Hatfields & McCoys, Criminal Minds, Warehouse 13, and Present Trauma in 2013.

In 2015, he appeared in Loaded. Flueger next appeared in Lawless Range and The Tell-Tale Heart in 2016. In 2017, he played in Special Skills and The Super.  He is slated to appear in several other movie roles, including Blowtorch Films’ You Are Here, The Job based on the Shem Bitterman play, and Chris Moore’s Kill Theory.

There is no information regarding his salary but his net worth is estimated at around $800,000. Seeing his performance in this field we can assume that he earns a good salary.

Flueger was rumored to be getting married to his girlfriend, actress Marina Squerciati. It later turned out to be false.

Patrick John Flueger has a height of 6 feet. His bodyweight is 50 kg. Besides these, he has dark brown hair and brown eyes.