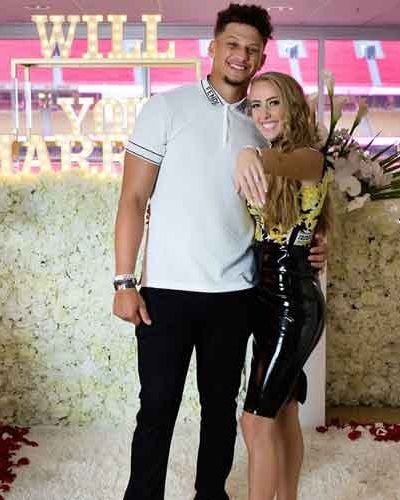 It was a celebration time for Chiefs quarterback Patrick Mahomes and his long-term girlfriend, Brittany Matthews. Patrick proposed to her recently and she said YES. The two shared the joyful news on their respective social media platforms for their fans. And their followers were delighted for the couple.

The couple, Chiefs quarterback Patrick Mahomes and his long-term girlfriend, Brittany Matthews got engaged this month. They shared the happy news on their Instagram accounts. Brittany uploaded a photo of the two at a dining table with candle-lights around. The engagement happened in a suite at Arrowhead Stadium. And there were lots of flowers around them as well. Brittany wrote for her 617.4k followers:

And Patrick also shared the news with his 3.7 million followers on Instagram.

CONGRATULATIONS TO @brittanylynne8 AND @PatrickMahomes ON THEIR ENGAGEMENT — A loving, wonderful couple who have been together since high school. Ain’t young love grand? pic.twitter.com/iWOf5u9paD

ON THEIR ENGAGEMENT — A loving, wonderful couple who have been together since high school. Ain’t young love grand?”

The long relationship between Patrick and Brittany

Patrick and Brittany have been in a relationship for many years now. The two started dating during their high school days. They were in their 10th grade now and were studying at a high school in Whitehouse in Texas. They attended prom together. Later, Patrick went to Texas Tech in order to play football and basketball for the college. While Brittany shifted to the University of Texas at Tyler which was around 440 miles away from the college of Patrick.

It became a long-distance relationship but they did not lose heart or hope. And later, Patrick was selected by the Kansas City football team and moved to that region. The selection happened in the first round (10th overall) of the 2017 NFL Draft. Brittany played professional soccer UMF Afturelding/Fram, a team in Iceland. She was here for less than a year and in October 2017, she moved to Kansas to be with Patrick.

The current career of the two and the small controversy…

Brittany became a certified fitness trainer. In 2019, she started her own Brittany Lynne Fitness. This is a website that provides training in fitness and also sells merch that she created and designed.

The two now have purchased a $1.925 million home in the city of Kansas. The purchase took place in 2019 and they have taken their fans to a tour of their house. They also have two dogs called Steel and Silver.

Brittany is often in the sidelines when Patrick is playing a game. She posts pictures on her Instagram. Once, she had posted a smiling photo of herself but mentioned that her stepfather has expired. People criticized her for being so happy at the death of her stepfather.

And in one post, she had talked about how she was harassed by Patriots fans when Chiefs were playing against New England at Gillette Stadium. She had mentioned that security guards had to intervene and take her to a safe place.