Patrick Muldoon is an actor and musician.

Patrick Muldoon is unmarried but is taken. He is in a long-term relationship with Juliette Binoche.

He and his partner started to date in 2014 and are still together.

He has been in a number of relationships in his life. In 1995, he dated the American actress Tori Spelling for several months.

After that, he began romancing the American model and actress Stacy Sanches in 1996. Their relationship ended in 1998.

After that, he began dating Eve Mauro, an actress 2008. After a year of their affair, they broke up with his girlfriend in 2009.

This actor was in a relationship with Denise Richards. They first started dating in 1998 but broke up. 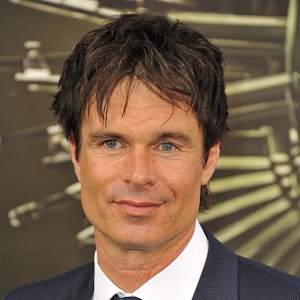 Who is Patrick Muldoon?

Patrick Muldoon is an American actor and musician. He is best known for his role as Austin Reed on the soap opera Days of our Lives.

He is also known for appearing on the American television sitcom Saved by the Bell. Two of his movie The Legitimate Wiseguy and The Quest for Tom Sawyer’s Gold are under pre-production.

Patrick Muldoon was born William Patrick Muldoon III on 27 September 1968, in Los Angeles, California, USA. His nationality is American and he is of Irish ancestry.

He is the son of William Patrick Muldoon II (father) and Deanna Muldoon (mother). His mom was a homemaker and his dad worked as a lawyer.

He has a sister named Shana Muldoon.

He attended Loyola High School. After high school graduation, he attended the University of Southern California and graduated in 1991.

While he was at USC, he was a member of the Sigma Chi fraternity and played Tight End on the USC Trojans football team.

Patrick began his acting career in 1990. His first acting role was as Matt in the 1990 TV film Who’s the Boss?  The following year, he appeared as Jeffrey Hunter in Saved by the Bell.

He made his big-screen debut playing the role of Tommy Andrews in Rage and Honor II (1993).

Next, he played the popular villain Richard Hart on the prime-time soap opera Melrose Place from 1995 to 1996.

In 2015, he produced and starred in Badge of Honor. Besides acting, he is a renowned musician. He is the lead singer and the guitarist for the rock band The Sleeping Masses.

In 2010, he released a music video titled “The Woman Is the Way” with his band. His movie Take-Two for Faith (2017) is under post-production.

Patrick Muldoon: Salary and Net Worth

He has accumulated a net worth of $1.5 million as of 2022. But there is no information regarding his salary.

Patrick Muldoon has a height of 6 feet 2 inches and his body weighs 98kg.

Besides these, he has dark brown hair and blue eyes.

Who was Patrick Muldoon in Days of Our Lives?

How tall is Patrick Muldoon?