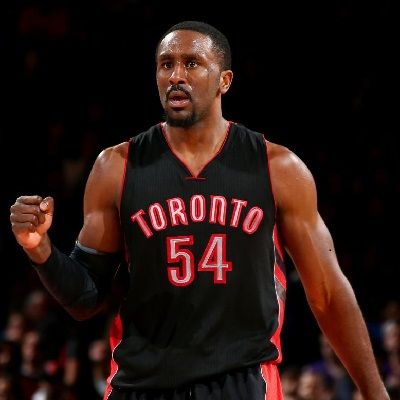 “A highlight video of hands down the greatest day of my life. Thank you to family and friends that traveled to be a part of our special day. Lastly, shout out to Anthony Hamilton for singing.”

“I want to take this moment to thank not only the fans of Toronto and those who supported and encouraged me throughout the years but every single individual in the country of Canada. Whether or not you were a constant follower of the Raptors since Day 1 or a newly converted admirer since the trade, I truly appreciate you.”

“A highlight video of hands down the greatest day of my life. Thank you to family and friends that traveled to be a part of our special day. Lastly shoutout to Anthony Hamilton for singing.”

Patrick married Sarah on 25th October 2019 at Casa Loma, Toronto, Canada. Patrick Patterson and Sarah Nasser had been dating since 2013.

On their wedding day, there were more tears than beers going around as it was kinda-sorta a reunion with his mini-Raptors.

And them brothers cleaned up nice for the wedding day of their team-mate Patrick and his bride, Sarah.

Today she is known as Mrs. Sarah Nasser-Patrick and she is a Canadian. She is the proud daughter of Joe and Monica Nasser. Sarah’s brother Micheal Nasser is an entrepreneur and her sister Emily is a model.

Sarah is an entrepreneur and an Instagram model. She also owns a fashion line, the ‘Nude Swim by Sarah and Daniela’.

Who is Patrick Patterson?

Patrick Patterson is an American basketball player. Patrick plays professional basketball for the NBA’s Los Angeles Clippers for the season 2019-20.

Patrick Patterson was born Patrick Davell Paterson on 14th March 1989 in Washington, D.C., United States and was raised in Huntington, West Virginia. His father is Buster Patterson Jr. and his mother is Tywanna Patterson.

He graduated in 2007 from Huntington High School, Virginia and studied at the University of Kentucky from 2007- 2010 approximately.

Patrick’s education and professional had the same start- in High School. He led Huntington High to three-straight state championships, the third was with the help of O. J. Mayo.

Rivals.com called him the ‘five-star’ recruit and listed at #3 power forward, and also the #17th player of 2007 in America.

2007-08, in the All-American season, freshman Patterson average 16.4 points. And after a Kentucky victory over Ole Miss Rebels, he was injured in his left ankle and missed the NBA draft.

2008-09, Patrick and Jodie Meeks were the most successful duos that season and on April 18, and Patrick decided to enter for the 2009 NBA draft but relented and remained in Kentucky for the third season.

He improved his outside shot instead of scoring and rebounding and shot about 35% from the 3-point line and this continued throughout the season.

Patterson was selected in the NBA draft by Houston Rockets as the fourteenth overall pick and on November 10th, he joined the Rio Grande Valley Vipers. In the nine games, Patterson averaged 35 minutes, 18.3 points, and 10.3 rebounds.

On 2010, December 15th, Patrick made his debut in the NBA regular season.

On 2011, March 14th, he made his first NBA start with the Rockets and scored 2 points and grabbing 5 rebounds. And for the 2012-13 season, Patterson became the starting power forward for the Rockets.

2013, February 20th, Patterson was traded to the Sacramento Kings along with Toney Douglas and Cole Aldrich.

2013, December 9th, the Kings retraded Patterson along with 3 of his team-mates to Toronto Raptors. 2014, July 12th, this time he would sign up with the Raptors for an $18 million US contract for three years.

In 2017, July 10th, Patterson signed up with the Oklahoma City Thunder. On a personal note, he had an operation on his left knee.

In 2019, August 1st, Thunder and Patterson came to terms that allowed Patrick to become an unrestricted free agent. In fact, Patterson intended to sign up with the Los Angeles Clippers.

Patrick Patterson signed up with the Los Angeles Clippers on 29th August, for the 2019-20 season.

Patrick Patterson has black hair and eyes. He is 6 ft eight tall and weighs 107kg. He is Squad # 54, and position is Power Forward with the League NBA, drafted by NBA in 2010 in the 1st round and the 14th overall pick.

What is the Net Worth of Patrick Patterson?

You may also want to read the stats and biographies of Dylan Bundy and Carlos Pena.