Mostly known for his playing style as a left-wing.

Patrick Sharp is currently in a marital relationship. He exchanged vows with Abby Sharp in July 2010.

His wife is the ambassador of ACTA, a clothing line. They met each other during their college days and are dating since then.

Together this lovely couple is blessed with two children.

Their first daughter, Madelyn Grace was born in Dec 2011. Then in Oct 2013, they again welcomed their second kid, Sadie Ellen. 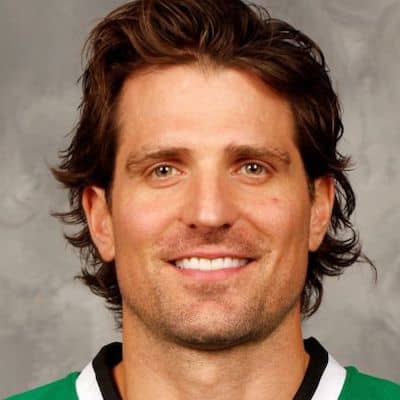 Who is Patrick Sharp?

Patrick Sharp is a Canadian Ice Hockey player who is now retired. He is mostly known for his playing style as a left-wing.

He was born on 27 Dec 1981 in Winnipeg, Canada. His father and his mother’s names are Ian and Ruth Ann Sharp respectively.

Patrick’s ethnic background is Caucasian and has an older brother, Chris. Talking about academics, he enrolled at the University of Vermont.

Patrick Sharp before entering professional playing has played for teams like Thunder Bay Flyers and the University of Vermont.

Then he was selected by the Philadelphia Flyers of NHL and made his debut in 2003-04. But in 2005, he was traded to another team Chicago Blackhawks with Matt Ellison.

But he was exchanged with Dallas Stars. The reason for his shift was due to salary issues. However, he again started to play with the Blackhawks form July 2017.

Sharp has to accept their condition of a base salary of around $800k. This was the last team he played as he retired and joined NBC Sports as a studio analyst from Oct 2018.

This former player was made a full-time analyst in Sep 2019.

Similarly, he received the same amount from the same team in 2013.

The net worth of three popular hockey players are,

This star is keeping himself away from any desperate scandals.

Regarding Patrick Sharp’s body features his height is 6 ft 1 inch and his body weight is 88 kg. In addition, he has hazel-colored eyes plus his hair is dark brown.

Patrick is available on social sites. He has more than 44k and 303k followers on Instagram and Twitter respectively.

What happened to Patrick Sharp?

Where does Patrick Sharp live now?